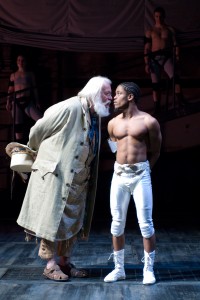 Don’t let the bare stage fool you.  Stripped down to the concrete blocks of the foundation, Tina Landau’s playing space for “The Tempest” (at the Steppenwolf) is more like a blank canvas painted with undulating video, eye-popping costumes and a sonic barrage of thunderclaps.

The visuals aren’t arresting so much as extravagant, and there is fun in that—to a degree.  Too often the choices feel random and I found myself asking: why?

The disparate narratives of Shakespeare’s play—the marooned, scheming noblemen; the budding romance; a slave who plots his revenge; the existential pangs of an old man—exist in separate worlds.  As for an overall theme?  You got me.  I’m still drowning in imagery that refuses to sort itself out.  Landau’s vision is flashy, but it doesn’t reveal the essence within.  It is the theatrical equivalent of a rave, where sensory-overload becomes the end rather than the means.  I suspect many will disagree with this sentiment.

Though busier as a director than an actor these days, when Frank Galati takes the stage it makes an impact.  His Prospero lords over this remote isle like a hippie with a god complex.  “Be collected,” he tells his overexcited daughter, and to his servant: “How now, moody?” and it’s like the Dude has arrived, and all that’s missing is the White Russian.

It’s a performance that stands apart—in good ways and bad, for it has almost nothing to do with the rest of the show.  Consider the dilemma of the slave Caliban (an excellent K. Todd Freeman), a would-be rapist who rises from a grate in the floor as if emerging from a ship’s hold, shackled like a dog—risible or merely intellectually honest?  Perhaps both.  Yasen Peyankov’s drunken butler Stephano is comic relief apropos of nothing, but I liked it all the same—he’s a South Jersey Italiano with an absurd toupee, naturally.

But again, how does it all fit together?  This is a production overstuffed with spirits that perform aerial tricks on ropes (why?),  a field of larger-than-life poppies that descend from the sky (why?) and a ridiculous array of pink and purple-hued suits (why?).  More to the point, why is Steppenwolf doing this play?  I’m afraid this production doesn’t even come close to answering that question.  (Nina Metz)