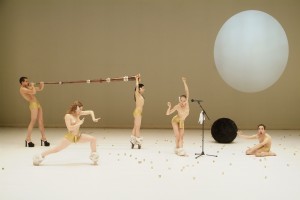 The creation of experimental ensemble dance is frequently credited as a group effort, assembled from the personal perspectives of multiple dancers and unified under the direction of one or two choreographers. The theatrical dances presented by Compagnie Marie Chouinard, on the other hand, seem very much to spring from the singular imagination of a lone provocateur with a reputation for uncompromising work. Chouinard first gained fame as a somewhat controversial solo artist whose performances earned as much or more critical ink for their shock (e.g. onstage urination, masturbation and the like) as their artistic value. When Chouinard started a dance company in 1990, her choreography continued to bear the mark of an experimental dissenter, only now working with a new medium—the dancers’ bodies the material from which a visionary artist would mold small universes.

Fitting then that her latest creation, a surreal, postmodern interpretation of the Orpheus myth, finds connection with an ancient legend about the power—both creative and destructive—of individual expression. “I think often when you have an artist who has a very clear vision, usually there is an extremity to it,” says Chouinard in an energetic, thickly (and charmingly) accented voice via phone from Montreal. “Like Johann Sebastian Bach, when he was writing his music—now we find it simple, but in his day it was very excessive. You often have excess when you have an artist creating a new vision, a new way of organizing things. When it’s new there is so much more of something that wasn’t there before.”

This is an appealing take on art: that it is by necessity, by definition an excess—an excess of expression, an overflowing of the artist into the world, unmitigated by precedent or expectation. Or, from another angle, that the unfamiliar, the truly unique always seems self-indulgent or excessive at first.

Chouinard was working with images of poetic conception in her choreography long before selecting “Orpheus and Eurydice” as the narrative backbone of the piece. Words physically pulled from dancers’ mouths, explorations of masculine beauty and objectification, even faux snakes were all in there before Chouinard realized she was touching on themes central to the familiar myth of the beautiful poet, son of Apollo, who charms Hades into a trip to the underworld to retrieve his wife, killed by a snake bite on their wedding night.

Watching scenes from Chouinard’s body of work, it is safe to say that Eros (appropriately enough for the current subject matter) universally drives her creative process—sex as a sort of artistic Darwinism. The grotesque, the sumptuous and the graceful are entwined in the mise en scene formed by the bodies of her company members: lithe, ropey, several of them androgynously beautiful, in simmering pasties and baggy pants or minimal gold underpants, they writhe and leer and hoot in a preview clip of “Orpheus.” A dancer reads gutturally in French, spitting into a microphone on a stand while a raucous bacchanal carries on around her; the moment is as if all the loveliness and freakish horror contained in the panels of Hieronymus Bosch’s famous triptych of heaven and hell were superimposed and allowed to exist legibly on a single plane.