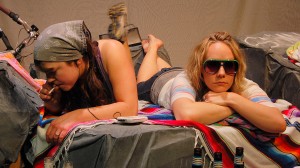 Two short plays, presented back-to-back, about the power games inherent in relationships, with characters who know each other far too well to pull any punches in pointing out one another’s failings. Both shows perfectly catch the ways we parody, mimic and appropriate the voices of those we love best, and the way we tear them to shreds behind their backs—but here in a way that feels sometimes uncomfortably voyeuristic but immediately familiar. “The Bird Sanctuary,” the stronger of the two, concerns itself with needing and needing to feel needed, focusing with brilliant precision on the minute balances of power between four friends and lovers struggling to come to terms with needs that can’t be met. The character’s different voices are mesmerizing, each constantly analyzing one another with uncanny accuracy and painfully accurate interpretations, where lines exhibit repetition and overlap that’s also beautiful formally.

“The Rocks” is less compelling, with two fairly bitter and nasty young women slowly revealing and then reveling in the other’s flaws and disappointments as they get drunk and stoned over the course of a long Saturday afternoon. The show seems to resist an audience caring about the friends and, again, tracking the balance of power is more interesting here than the two characters’ sarcastic, crass banter. During the frequent moments of blackout punctuated by pop music, they switch dominant/submissive roles and keep one another engaged in an equally elaborate game of destruction that feels less cathartic than pointless.
The two shows both indulge a bit too often in having characters tell poignant stories to each other rather than revealing themselves through action, and there’s far too much direct address to the audience in “The Bird Sanctuary” that doesn’t do justice to the playwright Lynne McMahon’s truly brilliant ear for dialogue. The confessional bent of both plays, with characters slowly admitting terrible little things about themselves to each other and the audience, seems to lend them better to a staged reading than a full production. However, I can’t imagine two companion pieces that better illustrate the concept of  “zero sum games” (a trope in “The Bird Sanctuary”), in which one player can only advance at the cost of another’s setback. “The Rocks” is so offensive and “The Bird Sanctuary” so familiar—we feel immediately that we have known all of its characters intimately—that the performances result in the deliciously uneasy feeling that an evening saying nasty things about people behind their backs can create.  (Monica Westin)