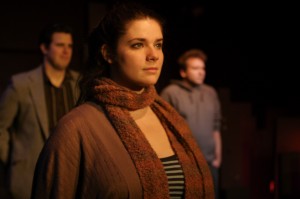 Theater is about showing.  Don’t tell us something is sad or tough or funny or complicated.  Show us, and leave the exposition to book writers. There are exceptions, of course, and you can catch two fine examples currently in town with “Diversey Harbor” (Theatre Seven at the Greenhouse) and “Pumpgirl” (at A Red Orchid). The scripts are verbal landscapes—closer to books-on-tape or something you’d hear on “This American Life.”  You have to adjust your ears and listen—really listen or you’ll miss the story.  The story is the payoff.

The cast speaks only in monologue, and they never interact with one another on stage.  Done right, their stories will bloom inside your head.  Done right, characters that remain offstage are just as vivid as the ones you see.  Done right, images become fixed in your mind—the backseat of a car littered with crumbs and soggy potato chips; an empty bowling alley where muddy footprints appear out of nowhere.  Done right, your senses become engaged in unexpected ways—the smell of gasoline becomes smashed cherries dunked in vinegar.

“Pumpgirl” is set in present-day Ireland, blue-collar division.  We hear the details of an unsatisfying marriage and the awkward pumpgirl (Grace Rex) down at the filling station who gets tangled up with the husband (Larry Grimm)—an affair that brings to mind Amy Fisher and Joey Buttafucco.  We hear from a wife (the stunning Kirsten Fitzgerald) who indulges in her own affair—one that turns out just as badly.  Their travails culminate on a single, melodramatic afternoon.

The play received a New York production in 2007, and a review in the New York Times prompted this comment online: “To us, a series of three people performing a series of disconnected, but interwoven monologues is not satisfactory. It does not seem to be a play but only a series of interwoven speeches.”

Indeed, these are not plays in the traditional sense—the audience is not a fly on the wall watching life unfold—but we’re not talking about anything unusual or experimental, either; playwrights from Neil LaBute to Brian Friel have used this format.

These are storytelling experiences, and they can be just as rich.  Richer, in fact.  Theatrical?  Absolutely.  The monologues start to resemble the hushed revelations of journal entries and the psychological atmospherics are hard to shake.

“Diversey Harbor,” in a remount (directed by Brian Golden), concerns Chicago twenty-somethings putting off adulthood until—what?  A traumatic event ties the group together, but their story is really about what it means to be young and single and alone in this city by the lake that might just swallow you up if you’re not careful.  I first saw it two years ago in a tiny space in Andersonville—it was Theatre Seven’s debut, and the kind of show that made you sit up and take notice.

Playwright Marisa Wegrzyn has a highly developed bullshit detector, and here she displays an ear for the way her peers talk and move through life.  You will recognize the stylings of these post-grad North Siders.  They are the people beside you the on the El; the people sitting next to you at the bar.  Pull up a seat.  They have a story to tell.  A picture will take shape—your imagination will fill in the blanks and color the pictures.

The cast owns the material.  (All four return from the original production.)  Charlie Olson plays a stoned-out dog walker who’s like a pre-stardom Seth Rogen—nice guy, but a slug.  (Olson also provides the Chicago skyline set design.)  Brian Stojak is the Clark Street douchebag who is likable despite the crap coming out of his mouth.  Robin Kacyn embodies the quirky vulnerability of a girl trying to find her niche in the world—or at least a decent roommate.  And Tracy Kaplan plays a bartender stuck on the daytime shift who can’t seem to jumpstart her life.

“Pumpgirl” playwright Abbie Spallen cooks with different flavors, but like Wegrzyn, she gives her characters a loquacious ability to draw you in and bust through to the other side.  (Karen Kessler directs the Red Orchid production.)

This is an Ireland of small towns and smaller lives.  Hammy, a loser on the make, looks around for a woman he might want to nail, and his eyes settle on one who is “Marilyn from the back, Manson from the front.”  Pause.  “I have a massive hard-on.”

His wife Sinead awaits his return at night, lying in their bedroom where she can see his headlights appear on the wall announcing his arrival as if an alien ship has landed.  “I have a whole family of women who’ve settled for a bunch of bastards,” she says.

Propositioned by one of her husband’s skeevy friends, she’s unable to resist: “It’s like drinking cider all your life and then someone brings you Asti Spumante.  You convince yourself that it’s champagne.”  There is desperation all over the place, and Fitzgerald wears it like perfume, spritzing herself and laughing through the stink.

Fitzgerald might be the single-most underrated actor in Chicago.  (The Irish accent she uses for this production is beautiful—that’s the only way I can put it.)  Built like Kathy Bates, she uses her body as a shield one moment, a punching bag the next.  She can shift from incredulous amusement to horrified dread without missing a beat.  See this show if only to see her performance.  Watch what she does with her monologues.

It’s instructive, because Larry Grimm offers a performance that feels ill-defined.  Grimm is a solid actor, but this type of play will expose anyone who isn’t completely on their game—actors can’t hide behind an enigmatic performance.  In Grimm’s case, you might have trouble picturing his character, even though he’s standing right there in front of you.  The story loses snap and focus.

And yet Kessler’s production is strong, nonetheless.  The cast sits on bucket seats ripped from cars, and the symbolism is clear.  They are all isolated, like drivers on the road—sealed off from one another until they crash and collide and their lives go up in flames.

You have to hear it to believe it.