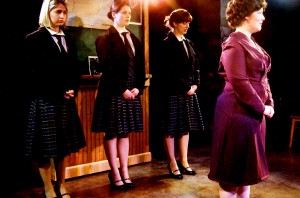 A mind may be a terrible thing to waste, but it’s also a terribly entertaining thrill to watch being corrupted.

“The Prime of Miss Jean Brodie,” Jay Presson Allen’s dramatization of Muriel Spark’s novel from the 1960s about a controversial schoolteacher in 1930s Edinburgh and the dangerous impact she has on a handful of young girls, is sometimes a clunky affair with an outdated framing device in which the play is “remembered” and tediously analyzed by a character being interviewed.  Its ideas on Calvinism, Catholicism, Fascism and countless other -isms certainly had more resonance and bite decades ago, and its examination of Scottish class and sexual mores would mean little to a modern-day American audience.  But it also remains a rare tour de force opportunity for a mature actress, contains several passages of dynamic and intelligent writing (much of it lifted directly from Spark’s novel) and on a very basic level celebrates that teacher in everyone’s life who for better or for worse left an indelible mark.  But even a star performance, some good writing and nostalgia isn’t enough to dramatically propel a two-hour plus evening.  There needs to be more, and in this remarkable revival from director Ronan Marra and Signal Ensemble Theatre, there is.

From the moment of her first entrance, this Jean Brodie (Patricia Austin) preens like a peacock, struts with a staccato momentum and strikes poses with a monstrously self-absorbed attitude usually reserved for fashion models.  When she speaks, she handles the rhythm and imagery of her passages as if speaking Shakespearean verse.  Her audience, both us and the girls on stage, are dazzled, but it’s ultimately a showy performance that lives mostly on the surface.  She’s never boring, but it becomes more interesting (and insightful into this revival) to watch her students’ reactions to her on their faces or through the nervous twitching of their bodies.  Indeed, when Brodie speaks of her girls’ developing sexuality and beauty, of their future love affairs—by which point she is living vicariously through her pupils for the sexual fulfillment she craves but cannot allow herself to embrace—it becomes wildly inappropriate.  When art teacher Lloyd leers at Brodie’s girls (unassuming Joseph Stearns giving an incredibly sexy performance), and ultimately seduces one of them, the level of discomfort—both on stage and in the audience—is palpable.  It reminds me of when a person looks at a teenager and comments on how attractive they’ll be someday… at best, it’s an accurate but awkward observation, at worst it’s prurient and downright creepy.  This is the sexual tension that director Marra and his superb Signal Ensemble actors have found deep within the script’s subtext, making it abundantly clear that although a lot of political and sexual attitudes have changed in the forty-something years since this play premiered, the one towards the sexual objectification of minors by adults or persons of power hasn’t.  While “The Prime of Miss Jean Brodie” still manages to be about the downfall of a remarkable woman, and manages to entertain as such with its histrionic declamations on art, truth and beauty, Marra doesn’t make it the tragic melodrama of other productions.  Pitched somewhere between a great educator and naïve woman, who has sacrificed her own sexuality but misguidedly projected it onto her students, this Jean Brodie may not have all our sympathies—the girls win that—but she certainly has our attention, thanks to Austin’s indefatigable energy.

Who knew that an old warhorse of a play could pulsate with so much energy, sexuality and resonance in a superbly entertaining revival such as this one?  After all these years, I guess “Miss Brodie” still has a lesson or two left in her. (Fabrizio O. Almeida)