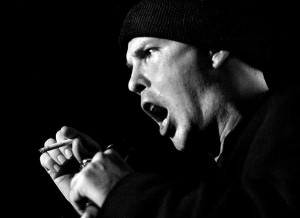 When Texas stand-up Ron White spends his entire routine clutching a glass of Scotch on the rocks and puffing delightfully on fat cigar, the move feels calculated–who has to smoke a damn cigar every time they tell a joke? But when a disheveled Doug Stanhope slouches onto the stage and drinks two-to-five beers–that just seems like the dude genuinely wants to get buzzed with the audience. “I like drugs, ” Stanhope says. “Every drug should be legal.” This sounds like the preface to a couple of sarcastic zingers, but it’s not–Stanhope clearly and honestly believes this, unleashing a hilarious diatribe of observation, opinion and, above all, profanity. Stanhope’s act sounds less like a comedy routine and more like a dude just relaxing on a couch and humorously riffing on what ails him, mostly society’s attitude toward religion, narcotics and deadbeat jobs. He attributes his success to drugs, cigarettes and booze: “I’m here because drugs expanded my imagination and made me think of your reality. Cigarettes gave me the patience to sit and write those thoughts down in a comedy-friendly format, and alcohol gives me the courage to stand up in front of you judgmental pricks.” (Andy Seifert)