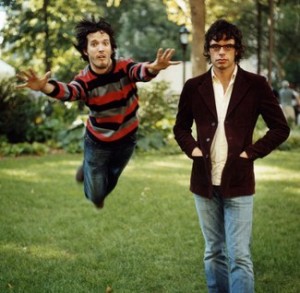 New Zealand’s fourth most popular guitar-based digi-bongo acapella-rap-funk-comedy folk duo rolls into Chicago (charging $38?! Who do they think they are, Tenacious D?) in support of their second and supposedly final season of the successful “Flight of the Conchords” HBO series. The incredibly perfect-for-each-other team of Bret McKenzie (bearded, former hobbit) and Jemaine Clement (low voice, ukulele player) have built their comic foundation on the power of rhyme, nonchalant New Zealander accents, pushing the limits of goofiness and “New Zealand vs. Australia” jokes. Mostly though, it’s the ridiculousness, taking the uncharted direction of a joke that makes these non-Australians so appealing, like passionately singing “You’re so beautiful, you could be a waitress. You’re so beautiful, like a tree. Or a high-class prostitute.” If the guys play the “hits,” expect a little “Business Time,” the French gobbledygook of “Foux Du Fafa,” the timid queries of “If You’re Into It” and the bizarre glory of “Bowie in Space.” The always entertaining (and occasional “Conchords” guest) Eugene Mirman opens. (Andy Seifert)