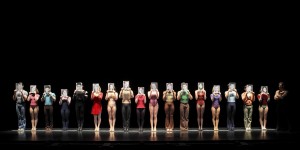 Not counting the recent 2006 Broadway revival, there hasn’t been a major production of “A Chorus Line” since 1990’s Broadway Tour of America, a company that hit the road not long after the Broadway original concluded its record-breaking fifteen-year run.

There have always been, of course, umpteenth opportunities to see the show via the regional circuit, many of them carbon copies of creator, director and co-choreographer Michael Bennett’s iconic original.  (Besides inspiring an entire legion of Broadway hoofers with the show—much like Robbins and Fosse had done before him with theirs—Bennett’s legacy includes a core of second- and third-generation dance captains who have reproduced every classic step for subsequent generations.)  And yet, I don’t think the show’s ever looked as good, or moved as well, as the production now blazing the stage of the Oriental Theater courtesy of Broadway In Chicago.

No doubt the creative trifecta in charge of this staging—Avian directing; original cast member Baayork Lee recreating the choreography; Bennett’s longtime lawyer and estate executor John Breglio producing—deserve much of the credit, having faithfully recaptured the exuberance and innocence of the original (“A Chorus Line” is pre-AIDS but the specter of that disease is everywhere, having claimed the lives of half of the show’s original creative team), as well as having cast a clutch of fine dancer-actor-singers (in that order) who immediately command empathy and credibility as Broadway gypsies putting themselves on the line—physically and emotionally—for an anonymous spot in the chorus.  True, some of the voices are weak, the show’s sociology suspect and the dance vocabulary dated to the point of seeming retro camp, but the brilliance of “A Chorus Line” has always been in the undeniable synergy of all its creative elements: from Bennett and Avian’s stunning musical staging and athletic choreography to Nicholas Dante and James Kirkwood’s absorbing and unflinchingly honest book; from Ed Kleban’s offbeat and poignant lyrics to Marvin Hamlisch’s eclectic and snappy score.  Case in point:  the show’s fifteen-minute “Hello Twelve, Hello Thirteen, Hello Love” number, better known as the “Montage” since it actually consists of musical numbers within numbers, monologues, lyrical fragments and all-out dance sequences.  Chock full of gorgeous cinematic transitions and beautiful tableaus, it’s an especially impressive achievement when you realize that the number, like the entire show, was molded from dozens of hours of tape recordings—personal ramblings recorded by a bunch of dancers in a small studio in the wee hours of the night in 1974—and then nurtured to artistic fruition with an ingredient missing from a lot of musicals today:  creative genius.  Along with this rewarding revival, affirming “A Chorus Line” as one of the best American musicals of all time, I recommend two equally worthy books on the subject:  Ken Mandelbaum’s absorbing “A Chorus Line and the Musicals of Michael Bennett” and Gary Stevens’ invaluable oral history of the show, “The Longest Line.” (Fabrizio O. Almeida)