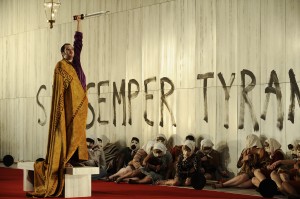 You would think that Mozart’s “La clemenza di Tito” (“the clemency of Titus”)—a work overflowing with the mature Mozart at his very best, completed and premiered less than three months before his death at the height of his creative genius—would be one of the most performed operas in the repertoire, much like his soon to follow “The Magic Flute.”  Like the “Requiem” that would also soon follow but which he left incomplete due to his sudden death at the age of 35, “clemenza” is not 100 percent Mozart, but for a very different reason: Mozart took the work as a commission and farmed out the recitative sections to a student.  This, taken with the fact that the form of the work is the older, more serious and sterile opera seria—which Mozart had not explored since “Idomeneo” and which lacked the wit and ensembling of his popular stage works—critics widely assumed that he didn’t care for the form or the work.  The glorious music itself, however, makes it clear that a real gem was carelessly tossed aside. The advent of a modern performing edition (the Neue Mozart-Ausgabe) and the efforts of the late French director Jean-Pierre Ponnelle have gradually restored at least some of the opera’s reputation.  A first-rate, cutting-edge thoroughly modern interpretation of the work such as the one being presented by Chicago Opera Theater—the first area performance in more than two decades—can only help further strengthen the case for it.  Incredibly, even Mozart conductor Jane Glover had never conducted it, even though she had been dismissive of the work in her 2006 book “Mozart’s Women.”  Given her inspired conducting for this production, I am guessing that some reassessment is taking place.  And the first-rate cast of young singers assembled makes every piece a jewel.  (Dennis Polkow)