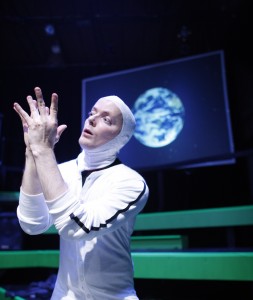 The group of short plays, lumped under the broad heading “New American Fable,” at the annual “Sketchbook” festival at Collaboraction, makes first and foremost one of the most engaged and skilled uses of theatrical space I’ve seen this year at theatrical performances in general, let alone short-play festivals, which usually resemble staged readings. The seven plays I saw (there are fourteen total, with a different order every night) play gorgeously with multimedia projections and surveillance cameras, harnesses, puppets and the amphitheater-style bleachers surrounding the room. Artwork connected thematically to the plays fills the walls. In short, the experience is rich even before the shows themselves are considered. Of the plays themselves there’s an obvious unevenness in focus and accomplishment, with no cohesion of theme and style that’s obviously the result of no curatorial ordering—other than that the showstopper piece, Dean Evans’ “Spacelab 2030,” ended up saved for last on this night. Highlights range from Joseph Ravens’ breathtaking dance/performance hybrid “Kattywampus,” to the gorgeous and hilarious “The Dreaded Zeppelin,” complete with dangling actor, of a WWI human target for Zeppelin bombs. Other pieces, such as Sean Graney’s ensemble confrontations of identity, “What I Am Supposed To Be,” fall a bit flatter except when they hit the right comic note (I should mention that every play I saw made successful attempts at humor, making it one of the most consistently engaging short-play festivals I’ve seen, if not consistent in other ways). But at the risk of repeating myself, the lesson in technical theater and the transformation of space that the night offers is worth the experience alone. (Monica Westin)