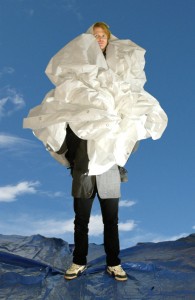 This is your last weekend to catch Cupola Bobber’s “Way Out West, the Sea Whispered Me” at Links Hall, and if you’re interested in performance that’s as concerned with wordplay as with image and movement, it’s a show that will offer a lot of food for thought. Focused on the sea, the piece is woven together with threads of different historical moments and psychological affects related to the ocean, from the nostalgia of seaside resort towns to a gloriously bizarre erosion narrative that tells the story of buildings and even towns that have slipped into the sea, and, as a perfect foil, the Depression dust bowl of Kansas. The piece is nearly as intellectually engaged and critically connected as an academic essay.

The movements are sometimes obvious; for example, in a moment very reminiscent of “Rosencrantz and Guildenstern are Dead,” the two performers, Tyler B. Myers and Stephen Fiehn, have a metaphysical argument while one, holding the other in various positions, tosses and catches an invisible object in a paper bag. And often the show feels almost precisely like a surrealist marriage between late Beckett and Magritte’s palette and figures, not an uninteresting combination but not very fresh or distinctive, either. The major movements come from blue and white tarps, rigged by a pulley system simulating waves and creating spaces around the characters, eventually unwieldy objects the characters wrestle with. The tarps aren’t even close to exquisite, but the awkwardness of their simulation works well with the smart but absurdist arc of the show, whose theme is strong enough to withstand some visual weakness.

For a performance as literary and with as many objects of interest as this one, the publication of a reading companion seems entirely appropriate, and there will be a launch party this Thursday night at the Hideout, which will also feature presentations by some heavy-hitting Chicago artists and performers. (Monica Westin)