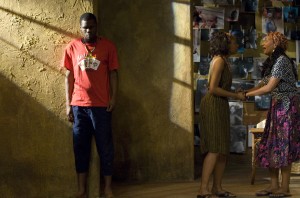 This week it was announced that African-American playwright Lynn Nottage had received the 2009 Pulitzer Prize in Drama for “Ruined,” her harrowing play set amidst the atrocities of an African civil war.  I wish “Ruined” was still playing in Chicago (the show premiered last year at the Goodman).  I could then offer you  an alternative to J.T. Rogers’ “The Overwhelming,” his well-meaning but entirely forgettable political drama set on the cusp of an African civil war, specifically the Rwandan genocide that claimed the lives of nearly one million people in 1994.

In this underwhelming Chicago-area premiere by Next Theatre in Evanston, an American political scientist and professor of international studies (Jack) moves his new wife Linda and 17-year-old son Geoffrey to Rwanda in early 1994, and then is shocked (shocked!!) to discover that the country is on the verge of violent civil strife.  Did I mention Jack was supposed to be an academic and scholar of international relations?  Maybe he’s not so good at his job after all, which might explain why he’s so nervous about losing tenure back home, and why he’s so desperate to churn out a book about a Rwandan doctor—also his former college roommate—who runs a pediatric AIDS clinic but who has gone mysteriously missing.  As for other annoyances, Linda is African-American (!) but little is mined from this potentially explosive (albeit contrived) plot detail. Geoffrey gets a blowjob from a local Rwandan whore, which I suppose we should interpret as one young man’s admirable attempt to connect with the people.  Secondary characters get to spout poetically sounding platitudes like “[The U.N.] is a small dirty Band-Aid on a large festering wound” and “A black African man is something not even seen by the eyes of God.”  And when the play finally reaches its inevitable conclusion, there is little dramatic payoff since Rogers has failed to flesh out any kind of credible lifelong connection or emotional bond between Jack and his Rwandan friend.

I’m afraid that not even gifted director Kimberly Senior, whose breathless pace and liquid scene transitions fulfill the author’s requirement that “The Overwhelming” should “fly along without stopping for breath,” can save an evening that raises political awareness but rarely one’s pulse. (Fabrizio O. Almeida)

You are missing the breathtaking art of the production. You may not like the story, but surely there was more to note than that, in addition to Senior’s spectacular work.