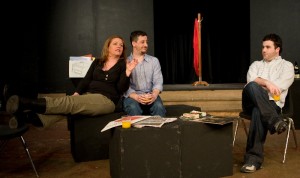 One of Stoppard’s most difficult plays to stage, “The Real Thing” requires a great deal in the way of timing; the dialogue has got to be rapid-fire and the pace impeccable to sustain momentum. Not only are there a great number of very short scenes, but the strength of the piece also comes from its quick turns of action and speech and smart play-within-a-play frame, exploring with humor and insight the ever-changing relations between a frustrated playwright, the two actresses he loves, more actors, and a Scottish prisoner one of the actresses has adopted as an activism project.  The Saint Sebastian Players’ great initiative only partially satisfies the show’s demands, with consistently impressive acting undermined by laborious set changes (sometimes as long as the scenes themselves). Combined with a narrative clip that doesn’t quite turn on a dime, the timing drags the performance down from its heady story. The show’s visuals and technical theater are fairly under-baked, with a bland but unnecessarily complicated set, and costumes that lack style and coherence, so there’s not much to look at while waiting for the next line of witty banter. (Monica Westin)

At Saint Bonaventure, 1641 W. Diversey, tickets at saintsebastianplayers.org. Though May 17.