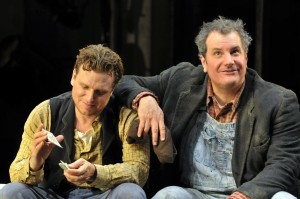 When you perform John Steinbeck’s “Of Mice and Men” at Steppenwolf, there is considerable baggage, given that the 1980 production with Gary Sinise and John Malkovich helped define the excellence so taken for granted at the company, and that the two went on to reprise their roles in a much-celebrated 1992 film version directed by Sinise.  Happily, however, this Steppenwolf for Young Adults version stands up memorably to these incarnations.  Cleverly making use of the existing set for “The Tempest,” director Michael Patrick Thornton has turned Prospero’s viewing stations into pockets of isolation for the loneliest characters in the play, Curley’s wife (Steinbeck never named her), who is the object of constant scrutiny by a jealous, insecure and overprotective husband, and the crippled Crooks (Emanueal Buckley) who is segregated from the rest of the ranchers because he is black.  What makes any production of “Of Mice and Men” work is, of course, the chemistry between George and Lennie, and Paul D’Addario and Keith Kupferer are able to make us believe that they are close friends looking out for each other.  George loses his temper at Lennie almost immediately, and at first, this seemed to be overdone.  But the moment becomes one of resignation, an important step along the play’s heartbreaking conclusion.  George initially thinks that it is possible to reason with Lennie, but as the reality sets in that Lennie can only do what he is told, if he can remember what he is told at all, George learns not to bother losing his temper.  The poignant presence of a real dog on stage makes the dog’s offstage shooting by a ranch hand all the more of a powerful harbinger of what is to come.  But the show’s most potent scenes are those when George spells out the details of the ranch that he and Lennie are going to buy, the only details that Lennie can vividly remember and the one comfort both have left when every other possible card has been played.  The finale is played so movingly that there was a mantra of audible sobbing heard across the theater by audience members of various ages while George lovingly makes Lennie actually “see” the ranch in his mind’s eye as his parting gift.  (Dennis Polkow)