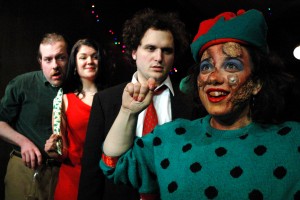 A car salesman has a concussion that releases his inner muse, who turns out to be more hideous monster than Greek goddess. The muse, demanding and repugnant, manipulates and blackmails her salesman using her power over his career; eventually she forces him to make choices that ruin the rest of his life at the cost of their relationship. The story, half Faustian and half “frog prince,” transcends its clichés about the demands of a vocation through powerful images and strong acting, especially Ariel M. Trocino’s muse, that displays deft control in somewhat hyperactive scenes that could otherwise devolve into chaos. “Musing” is finally very funny, if inconsistently so, mixed with effective creepiness that gets more chilling over time, and if the writing itself is uneven, with some occasional forays into tired themes and predictable jokes, it’s easy to overlook and move on thanks to the real food for thought and satisfying stride the production provides. (Monica Westin)