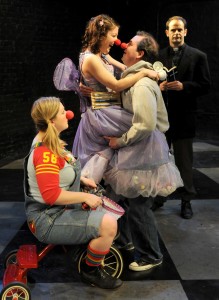 The Black Plague of the fourteenth century decimated one-third of Western Europe. Kinda puts all that recessionary gloom and doom in perspective, doesn’t it? In Peter Barnes’ “Red Noses,” Strawdog Theatre Company looks at order, chaos, sacrifice, community and how people cope when it all collapses.

Father Flote (John Ferrick as a clerical Everyman) searches for a way to serve his plague-ridden community. He finds it in laughter and entertainment; with Pope Clement VI’s (a delightfully amoral Stephen Taylor) backing, he travels the French countryside bringing mirth and merriment to those about to buy the farm.

Director Matt Hawkins’ staging keeps the show clipping along, peppering the tough text with eye-catching visual metaphor and anachronistic yet apropos 1980s pop tunes. The multi-talented ensemble has the singing and comedy chops the show requires; standouts include Shannon Hoag who sings, plays the cello and makes her character’s loneliness and fear palpable. (Lisa Buscani)