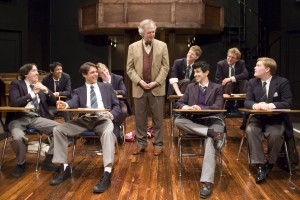 Walking down into the basement of the church where TimeLine Theatre holds court, there has always been the sense of heading into a school of sorts, but having to literally pass by the cluttered bedrooms of the “The History Boys” to find your seat—with the boys there engaged in various leisure activities as you do—it is amazing how instantaneously you are transported back to school.  As you find a seat, you notice that four across each section have upright armrests and there is a natural instinct not to take these desks, in the same way that most of us were unlikely to sit in the front of a classroom on the first day.   As the bell rings and the boys whoosh by you to take their seats, class is in session.  Any worries that you might have had about how ready TimeLine—or any smaller theater company, for that matter—might be to take on the area premiere of such a celebrated play with so many potential pratfalls from casting credible kids put in delicate situations to perfecting working-class British accents quickly fade away as you find yourself totally immersed in their world.  I don’t know what kind of techniques director Nick Bowling might have employed to have the eight-ensemble cast seem as if they know each other as well as a group of students who have been together in class together for what always seems like an eternity while it is happening, but the way these young men interact is extraordinary.  No less an accomplishment is that the teachers and the headmaster who are preparing these students for their Oxford and Cambridge entrance exams also interact with the students and each other with the needed familiarity necessary for Alan Bennett’s witty and thought-provoking play to work its special charms.

Much has been made about the supposed pedophilia of “The History Boys,” and some see this as a central issue of the play.  But the fact that Hector (Donald Brearley), an illuminating English professor with a penchant for poetry and the spontaneous, likes to offer the boys a ride home on his motorcycle and gropes them while he does, is actually the least of his crimes, at least as the headmaster (Terry Hamilton) sees it.  “That he grabbed a boys’ balls is something I can categorize,” says the headmaster, who has been looking for an opportunity to sack Hector because his teaching effect is not “quantifiable” in a British pedagogical system that found itself in crisis in the early 1980s as headmasters found their own worth increasingly measured by the number of significant scholarships that their students ended up with.  To that end, the headmaster brings in Irwin (Andrew Carter), a young historian whose sole mission is to help the boys dazzle the examination boards with unconventional takes on history that bracket truth and favor the less beaten path.  “Tell them Stalin is a sweetie,” is how one student sums up Irwin’s angle on not taking the usual “dull and boring” approach to history.  The headmaster blackmails Hector into sharing his classroom with Irwin, himself a repressed homosexual who has radical ideas about everything else, yet knows nothing whatsoever of himself, as his manipulative seduction by one of the boys—a straight one, at that—indicates.  Mrs. Lintott (Ann Wakefield) offers the one refreshingly female perspective (“women followed men around with a bucket while they were ‘making history'”) in a play often dripping with testosterone.  Yes, the boys and the teachers are all too human, and the boys themselves often know crucial things that their teachers will never know.  But when all is said and done, the real issue of “The History Boys” is what do we, as a society, want education to be: knowing for the sake of knowing with all of its infinite and unforeseen applications, or as a quick-fix specific agenda for a specific situation that is here today, gone tomorrow, leaving the clueless in charge?  (Dennis Polkow)