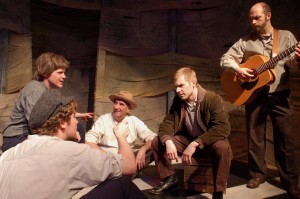 It’s tough to tackle Steinbeck’s “The Grapes of Wrath.” The classic has often been successfully produced on stage and screen; it’s difficult to forget Henry Fonda staring into a bleak future. But Infamous Commonwealth Theatre gamely remounts the piece as their “nature” season finale—unfortunately, with mixed results.

The Joad family’s flight from Dust Bowl Oklahoma to California lacks the urgency of a family on the brink of extinction. Jennifer Mathews captures the steel of the indomitable Ma Joad, but the rest of the ensemble greets each new tragedy as if they’ve just been told they’ve run out of pie at the local road house. Genevieve Thompson’s direction undersells the Joads’ California crossing, as well as the desperate tenderness of the climax.