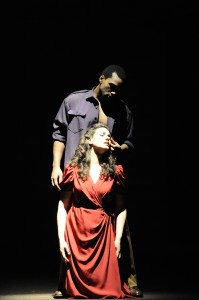 Bizet’s “Carmen” is the one opera that everybody knows, even those who have never been in an opera house.  Thanks to countless parodies, cartoons, sitcoms, plays, movies, commercials and the like, its infectious melodies bring an instant nod of recognition from even the greenest of operatic novices.  How then, to justify Peter Brook’s “La Tragédie de Carmen,” a truncated version that dumps half the music and drama, cuts the chorus, most of the orchestra, most of the characters and rearranges and reorders what little is left?  In short, everything that makes “Carmen” the grandest of grand operas goes missing here.  Clocking in at a single intermissionless act less than eighty minutes long, the only thing not cut is the title, which has bizarrely been expanded, but which could more accurately be called “Carmen remix.”  The fact that the most uplifting musical moment came when the fourteen-piece chamber orchestra was silent and a canned version of the familiar fully orchestrated “Carmen” Overture that usually starts the opera came blasting from the Harris Theater sound system towards the climax was the most persuasive argument for the emptiness of this exercise.  Sure, this version allows companies of limited resources and audiences with limited attention spans the opportunity to experience a Cliffs Notes “Carmen,” but we have come to expect so much more challenging fare from Chicago Opera Theater that I found myself genuinely puzzled by why this was being done.  That said, Sandra Piques Eddy makes a seductive Carmen and gives her vocal highlights reel a dark and rich tone, even though you may find yourself wondering why she has any interest in her bumbling and dueling lovers, here, a soldier and, as in “Carmen Jones,” a prizefighter instead of a bullfighter, leaving the lyrics of the famous “Toreador” song and its bull references coming across as another kind of bull altogether.  (Dennis Polkow)