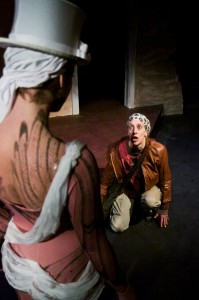 "The Day of Knowledge" was first produced as part of Leap Fest 4/Photo: Ryan Ward Thompson

Leap Fest, one of the strongest new-play festivals in town for five years running, goes into its sixth incarnation this month. The festival is unique in subject matter, focusing on sociopolitical and overly political plays, which other companies might shy away from, and three Leap Fest plays have gone on to win Jeff Awards, so the odds of seeing one of next year’s Jeff Award-winners is uncannily high. I spoke with Drew Martin, the interim co-artistic director (along with David Alan Moore), about what to expect at Leap Fest 6.

Leap Fest is known as a powerhouse new-play festival, and the Jeff Award record certainly attests to its strength. How do you choose the plays, and what’s exciting to you about the process?

I attribute the Jeff odds to the selection process. The plays we choose are whittled down from hundreds, and we read them over and over and argued about them. We’ve done plays in the past from all over the country and internationally. This year, four of the five playwrights are from Chicago, which isn’t intentional because we don’t target any particular demographic and it does vary from year to year.

As far as I’m concerned, Leap Fest is exciting for a couple reasons. The first is this highly select group of work, picking five pieces each year from emerging playwrights from all over the world. Then there’s the fact that the playwrights are deeply involved; we’re not just putting on plays. The purpose of the festival is to fill that hole in how plays get from a reading to a full world-premiere production. There’s sometimes a great gap between the two, and it can be hard to map that jump, so this festival offers an incredibly useful real in-between stage.

It’s exciting for audiences because they’re seeing something not in a rudimentary stage, but plays fully developed in their own right. And yet they’re at a stage where playwrights and the production team is still testing audiences for feedback and input. The interactive element, being able to give real input, is important. And so since we do three presentations of each play, you could literally come back the next week and see the impact of comments the week before on rewrites. We have exciting, somewhat chaotic weeks in between where playwrights are deciding on changes and tweaks.

From a cursory glance at the descriptions of the five plays, there seem to be themes very much in keeping with the overt political messages that characterize Stage Left productions. This year the plays address terrorism, war, interrogation and constitutional rights, which is strikingly “heavy” and somewhat dark for a new-play festival (many of which attempt to include a lot of comic balance).

It’s a real mix. All the plays are really different, and the festival is a mishmash, as it has usually been. Certainly given what we do at Stage Left, we’re doing plays that reflect what’s going on in society, so they’re sometimes funny, sometimes wearisome. I was just looking at the list myself this morning, and I think that, looking for a common thread, all the plays seem to suggest that we’re in a strangely serious and yet simultaneously not serious time. I think the plays reflect a mature stage of the fear-mongering that’s been going on for the last eight years—where people are tired of it, and I see reflected in these scripts a common refusal to wallow in fear and how bad things are, but a reaching for something to do about it. One play is a spy thriller and “Anna is Saved” is definitely a comedy, “Safe” is a wonderful drama and “Hungry Ghosts,” while treating a serious topic, is performed in a very theatrical environment with ghost rituals…

David Alan Moore, whose “Day of Knowledge” you directed this spring, obviously has a really strong voice at Stage Left. How would you characterize Moore’s voice, and how does “Safe” compare to “Day of Knowledge”?

It’s interesting. David is hugely talented, and he’s been writing professionally by trade for a long time, but plays are relatively recent to him—about eight years ago, which is recent for us old guys. In each play I think he’s really exploring a balance between fantasy and ritual. All his plays are very smart, and they reach to more than pop culture. “Day of Knowledge” was drawing from pre-Christian pagan rituals in the caucuses and the Bible not to mention a lot of Buddhist tomes, while “Safe” is not as theatrically wild as “Day of Knowledge,” and delves much more into characters and what they’re searching for. The major question the play reflects is: How do we feel safe? And how in this world, where you know everything that’s going on two seconds after its happened, how do you center yourself and deal with all those things? In both plays there’s the basic challenge of how do you cope with things that happen, not just whom do you throw in jail or picket against, but how do you spiritually cope inside?

Plays include David Alan Moore’s “Saved,” about the fallout of an emergency dispatcher whose client dies while on the phone; Karla Jennings’ imagining of bio-terrorist threat in”The Ruby Vector”; “Kingsville,” Andrew Hinderaker’s exploration of the right to bear arms; M.E.H. Lewis’ “Hungry Ghosts,” a revisiting of the aftermath of the Vietnam war; and “Anna is Saved,” a comic adaptation of Antigone reimagined under modern government interrogation.

Leap Fest runs May 14-May 30, with five shows running in varied repertory. A schedule and complete description of of plays can be found at stagelefttheatre.com.