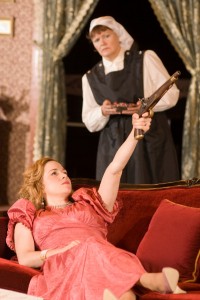 Ibsen’s “Hedda Gabler” is either a modern woman acting out against an oppressive society or a shrew who needs a hobby that doesn’t involve guns. Either way, the Raven Theatre’s new production of the 1890 classic is a well-portrayed, smartly executed chess game played by a woman who wants more.

Hedda (Mackenzie Kyle) is a brittle beauty who has married beneath her to affable, naïve George (Ian Novak).  Bored, she wreaks havoc on her brilliant ex Eilert (Ian Paul Custer) and her former schoolmate Thea (Symphony Sanders). Kyle deftly walks a razor-thin line of control, keeping Hedda’s frustration-fueled bitchiness in check until her second act spin-out; even then she makes the character’s insane personal agenda plausible. Novak tugs at the heartstrings as George, desperate to find the love in a woman who can’t love him. Andrei Onegin’s lovely set is beautiful valise one should open with care. (Lisa Buscani)