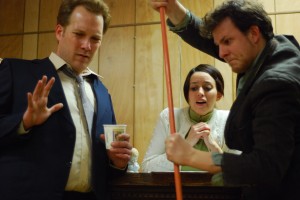 A trip through the rabbit hole of American mythology, presenting small-town girls, hustlers, pimps and seen-it-all grizzly men, brought together by constant bottles of shared whiskey. The show walks a fine line between charming and corny, and for every powerful image—LaQuin Groves as a traveling carnival barker for a crocodile with whom he shares a poignant personal history—there’s a helping of nostalgia that’s sometimes hard to swallow. The play is framed by a creepy, cackling old man from the South, who insists to a silent itinerant named Chuckles (a cross between Harpo Marx and Chaplin’s tramp) that if he’d just stop and look around he’d notice what an interesting country he’s in. Chuckles then appears as a low-level employee in interweaving tales of lost American dreams, pushing a broom around different sets that roll on and offstage like pop-up illustrations in a children’s book. “American Notes” is well-acted and visually conceived, and there are a number of sharp, funny lines, especially surrounding its most compelling character, F. Tyler Burnet’s paranoid has-been professor, now conspiracy theorist, who insists to a tabloid reporter that he sees shadow people made from a great sea of psychic debris. By the end of the second act, though, when a brokenhearted man finds solace in the innocence of a night clerk in a middle-of-nowhere motel, and the two of them compare stories about their dying fathers, sheer melodrama finally completely drowns out more subtle explorations of character and place.  (Monica Westin)