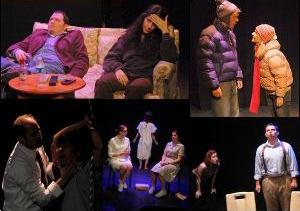 The superficial public image of the ugly American, with stereotypes firmly anchored temporally in the Bush era, slowly gives way to the inner agony of the private American at home through a series of almost a dozen ten-minute plays. The first half focus on America’s sense of itself in the world, with a few very clever plays at the beginning confronting our baffling image of other cultures (“Ten Minute” and “Plain in the Land of Shinar”) that lead to more heavy-handed and less interesting explorations of America’s relationship to war. The second group of shorts considers the American individual’s repressed rage, paralysis and idealism, mostly through lots and lots of soliloquy. As usual with the side project’s year-long festival of short work, there’s a strong sense of how a group of pieces can engage in conversation, but perhaps ironically, the most stereotypical American characteristic of “Atom Smashers” is its generally unwavering belief in an audience that cares deeply about others’ inner angst. One of the plays, “Maraschino Red,” does undermine this sense, with playful jabs at a successful American family man who whines about the lack of excitement in his life, but more often characters release their inner grief and anger with little self-consciousness, and sitting through the second half is a lot like being a fly on the wall during someone else’s therapy session. (Monica Westin)