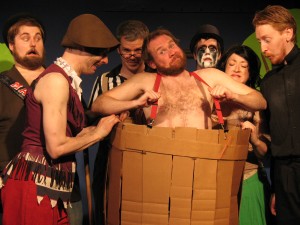 Anchored firmly in a bizarre nineteenth-century America, a young and hyperbolically Italian woman named Maria (played by a dynamite Allison Bills) emigrates to Niagra Falls to pursue a career in daredevilry, joining an almost indescribably peculiar group of characters in an often stream-of-consciousness but always focused comedy of striking talent. The show is, above all else, obsessed with the nature of performance itself, and “Daredevilry” combines elements of stand-up, improvisation/sketch comedy, cross-dressing, sitcoms, historical reenactments, vaudeville and early radio in a kind of mishmash spectacle of the history of the American stage.  There’s almost nothing reining in director Timmy Mayse, who includes absurd marionettes on tightropes, a digression into Willy Wonka song and a particularly strange scene of torture involving ring pops; in other words, the show could have been an utter disaster. Instead, it’s a triumph of comedy, like the most brilliant sketch carried through to its insane logical conclusion, where smart work with double casting and repetitions of motif add layers of meaning that lift “Daredevilry” into the world of “real” theater. The cast, mostly all improv actors, are (not surprisingly) at home with inhabiting awkwardness, and when the show occasionally falls flat on its face, their ability to inhabit that brief failure makes the experience an even more refreshing relief from drama’s usually anxious fourth wall. (Monica Westin)