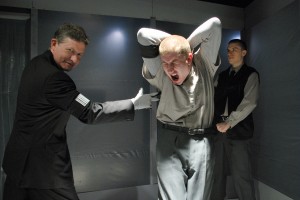 Here’s what I can tell you about British playwright Chris O’Connell.  He worked as a probation officer in the 1990s, which clearly informed his preoccupation with derelict characters struggling for control.  9/11 happened while he was writing the three plays that established his cutting-edge style (1999-2003’s “Car,” “Raw” and “Kid”), and by the time this triptych of short plays was revived in London as “Street Trilogy” in 2005, the atrocities of Guantanamo Bay had depressingly come to light.  Finally, he’s a writer known for working with innovative theater companies who have best served his pieces by infusing a heightened sense of storytelling with multimedia savvy.  So it’s easy to understand what inspired O’Connell’s new play “Zero” as well as why those technical whiz kids at Oracle Productions would want to be the first to secure the American rights, which they have for this US premiere.  Unfortunately, as this disappointing and ultimately dull experience proves, even a few technical tricks can’t save what is essentially a mediocre play.

“Zero” takes place twenty years into the future where conglomerate Global Economic Alliance has established hundreds of camps in which habeas corpus is a concept of the past and the brutal abuse and ill-treatment of its prisoners is the norm (one female interrogator is particularly fond of humiliating her subjects with bloody tampons).  And yet, against the odds, a neurotic translator turned whistleblower, along with a reluctant prison guard, struggle to expose the truth about Camp Zero.  I can’t tell you much more than that because, quite honestly, the narrative action was incoherent throughout much of the play.  This wasn’t so much due to O’Connell’s non-chronological scrambling of scenes—a tired device that few playwrights can exploit cleverly anymore—as much as the fact that I was completely uninvolved in either character or proceedings.  Everyone who you’d expect to be evil is a monster.  In trying to follow the lives of his two anti-heroes, O’Connell loses focus and leaves his play without a major protagonist.  The piece says nothing new or insightful in its condemnation of civil rights abusers and those who place themselves outside the jurisdiction of the law.  Nor does it offer a passionately written set piece arguing in favor of these types of camps, or defending a country’s right to barbaric measures in times of barbaric terrorism.  Indeed, as the play stands now, there’s more dramatic tension to be found in a well-written piece of journalism.

Ultimately, the material is simply a waste of Oracle’s resources and Artistic Director Ben Fuchsen’s intelligence.  With “Zero,” the synthesis between script and Oracle’s strengths and style is never achieved, the technological tricks amounting to little more than window dressing.  Perhaps Fuchsen should resist the urge to produce these Orwellian and self-consciously loud dramas that clearly don’t inspire Oracle beyond the realm of contributing close-captioned television monitors, trinkets that glow and ear-piercing blankets of sound.  In 2000, the Wooster Group took a seventeenth-century drama by Racine (“Phaedra”) and found parallels for the digital age using digital-age multimedia.  It was likewise for Complicité in London in 2004, when they tackled Shakespeare’s “Measure for Measure” and opened the play up with their stamp of high-tech avant-garde techniques.  It’s time for Oracle to go after bigger game if they want to achieve the artistic heights that these other similar companies have done.  And quick, before someone else in Chicago starts doing what Oracle does and better. (Fabrizio O. Almeida)