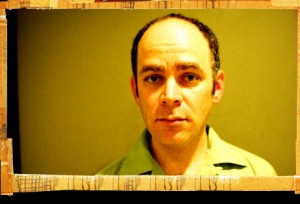 Is Todd Barry merely a comedian? Nay! Todd Barry is an incoming juggernaut, a megastar on the rise, a future inductee to People Magazine’s 50 most beautiful stars. If George Clooney balks at “Ocean’s 14,” who do you think they’ll be calling to replace him? That’s right, Todd Barry, who, by the way, is poised to put the bongos back on the musical map. Yes, Todd Barry is a big deal. He says it himself on the opening track of his newest album, “From Heaven,” after he thanks the opening comics: “It must be exciting for those young comics to work with me, it’s kind of exciting, not be an asshole or anything, but I’m semi-famous.”

Of course, he’s joking, but it’s worth noting that Todd Barry’s built the foundation of his career on a very sly, crafty bit of self-deprecation. Bald, 45 years old, and a king of tongue-in-cheek cockiness, Barry says near the end of “From Heaven” that “time flies when you’re seeing the best show you’ve ever seen in your life.” It’s a really perfectly delivered line, and there’s some truth to it: the fifty-minute “From Heaven” breezes by all too quickly, and while Barry may not be biggest draw in the comedy world, he’s certainly not low-profile anymore.

“I have a nice level of recognizability,” Barry says via email. “I get approached several times a week, but people are usually nice, and I can still ride the bus and shop at Kmart without causing a mob scene.”

His celebrity status may get a nice bump from recent stints, having played Mickey Rourke’s jackass boss in Darren Aronofsky’s “The Wrestler” and having briefly filled the role of “third Conchord,” a.k.a Todd the unwelcome bongo player, on HBO’s “Flight of the Conchords.”

“We had a brief discussion about getting me one bongo lesson, but that never panned out,” Barry says of his popular “Conchords” part. “It probably made it funnier that I didn’t completely know what I was doing.”

While Barry appeared to hint that he may have a TV engagement on the way (“way too early to talk about it”), it appears he’ll delay certain stardom for the time being to concentrate on stand-up shows and, in much more serious matters, a “colossal update to his Web site.” (Andy Seifert)