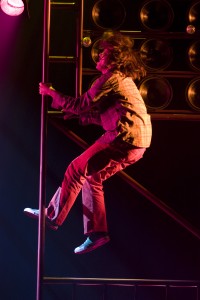 Stoppard. Rock ‘n’ Roll. Seems like a “can’t-miss” cross-fertilization since most everybody likes one or the other—or both—and the summation of the two surely will be more than the sum of its parts. Well, as one who loves both, why doesn’t this come together? As is typical of Stoppard, the answer can be found right in the work itself: “Foreign journalists never write about the music,” complains Czech rock-lover-turned-dissident Jan (Timothy Edward Kane), “except as symbols of resistance.” Jan could well be offering a capsule review of Tom Stoppard’s “Rock ‘n’ Roll,” the very play that his character dominates.  If you’re expecting a play called “Rock ‘n’ Roll” to somewhere, somehow, offer at least an attempt to account for the specifics of the connection between the rock genre itself and the ups and downs of social revolution in Prague across the Soviet invasion, occupation and withdrawal spanning 1968 to 1990, you are in for a disappointment.

As you would expect from Stoppard, the discussions in the work itself raise labyrinths of fascinating issues aphoristically and from all sides; how easily we can be manipulated, especially when the subject is something we don’t know anything about nor care anything about, which is demonstrated through a stale tea biscuit; who are the real losers and winners of (1) communism vs. fascism—”Stalin killed more Russians than Hitler”—and (2) communism vs. capitalism, when viewed from Eastern vs. Western Europe; how the inherent ambiguity of language can be used as a tool of manipulation by those in power.  But perhaps most tellingly, how even the most radical symbols of reform of the time—long hair, loud music—can be turned upside-down by the counterculture of the counterculture wherein rock can become the icon of the very establishment it originally was created to oppose both in the phenomenon of colonial capitalistic concretizing of mega-groups of the West and the establishment of party-sanctioned rock festivals in the waning years of the Iron Curtain.

But the closest we get to the bone of how rock music can change behavior is during a discourse about “heretics” giving meaning to “defenders of the faith” because “no one cares like a heretic.”  What about the Plastic People of the Universe, the band that plays a central role in being offstage symbols of resistance?  “They’re not heretics, they’re pagans.” Great analogy, but what goes frustratingly undemonstrated is exactly how it would be possible for a minor Czech band that is an Eastern bloc derivative knock-off of Frank Zappa’s Mothers of Invention and the Velvet Underground to—musically speaking, at least—be “pagans”?  Like all of the rock music that is carefully specified and licensed for use in the show and which is used primarily as loud aural wallpaper for distractingly endless scene changes, the music itself is irrelevant. For those of us who lived through this period of time and who care about the specifics of the music that helped to define and culminate the era as we went along, this is as radical a faux pas as if Stoppard had us listening to Latin when a character is translating Greek.  In the end, a popular band of the era said it best in a satirical concept piece and album that summed up the generational and geographical divide that appear to make Stoppard so removed from his rock references: “Too Old to Rock ‘n’ Roll, Too Young to Die.”  (Dennis Polkow)