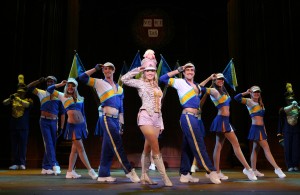 After enduring the horrors of “Dirty Dancing” and “Xanadu” live, you might be tempted to swear off attending musicals derived from cult movies altogether, but “Legally Blonde: The Musical” works so well on every level that audiences of every access point will enjoy it. For starters, if you are a fan of the 2001 Reese Witherspoon movie about a sexy “dumb” blonde who follows the boyfriend who dumped her off to Harvard Law School, all of the elements that made that movie so funny and so poignant at the same time are here: the charming lead, the girlfriends, the exercise guru accused of murder, the good and the bad lawyers, the law students, the horny professor, a pool worker with a secret, a UPS guy with a “big package” and even the adorable Chihuahua and bulldog.  What the musical can do, however, that the film cannot, is express its life-affirming message about prejudice and standing up for yourself through song and dance that makes that message even more potent and entertaining. The initial jilting scene, for instance, uses techniques of Mozartean opera to have what starts off as a traditional love duet but we know something is amiss when the guy interrupts his partner’s aria with “I’m not finished yet” and his section goes on and on about how “serious” he wants to be.  She eats this up, of course, thinking he is about to propose, and the realization of what happened comes after both sing their intentions simultaneously.  It is this kind of attention to musical and dramatic detail that lifts “Legally Blonde” into a higher level than just exploiting a popular movie for a live cash cow.  The score and lyrics by Laurence O’Keefe and Nell Benjamin (both are listed as co-composers and co-lyricists) consist of energetic and melodic, almost Jerry Herman-like tunes, along with punchy and pithy lyrics that are mostly sung, although there is much under-scoring and an extravagant (by Broadway standards) fifteen-piece orchestra. The direction and choreography by  Jerry Mitchell does recall some of the exuberance of his “Hairspray” and like that show, the dancing is virtually non-stop and contagious.  This touring production appears not to have skimped on casting and quality, as every performance is a gem, but particularly Becky Gulsvig in the lead.  The only caveat is the way that the work itself portrays Harvard Law School since the two professors in the film are made into a single character in the stage work, but all of the redeeming qualities of the “good” female professor who acts as a mentor during a decisive moment have been eliminated, and the impression left in the show is that Harvard teaches its law students only how to look for “blood in the water” and how to put their own interests above anything else.  That leaves a legal stereotype in as much need of correction as everyone assuming in the show that blondes are dumb and superficial.  (Dennis Polkow)