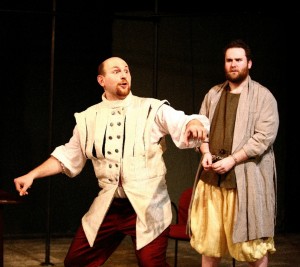 A standout production of a play for which ambition in the theater company that would put it on is absolutely prerequisite. “Measure for Measure” is an utterly bizarre problem play, firmly planted both in comedy and often heavy-handed philosophical inquiry considered via a heroic nun, colorful characters from a local brothel, an incompetent cop, a duke posing as a monk to spy on his citizens, and a beheaded pirate used as a pivotal plot device. The Promethean Theatre Ensemble nails this ambivalence magnificently without for a moment regressing into farce. The play’s thematic concerns with justice, truth and sex are embodied consistently throughout the show, and each line is delivered at a perfect pace and translated beautifully through non-verbal language, with a healthy dose of the surreal, and finally with a tongue-in-cheek throwing up of hands in the last scene when the play devolves into utter absurdity. While it’s a complete comic and often dramatic triumph (the fact that the company illuminated the consistent comedy in “Measure for Measure” is a success alone), the production isn’t flawless by any means. Acting is very uneven, and the best performances (Nick Late as Lucio and Emma Kate Starling as a cleverly cross-gender casting in Escalus) are in supporting roles. The abundant and elaborate set changes, performed by various masked characters who cavort seductively around the stage, are mostly needless, and the costumes and set are all over the place, with little stylistic or thematic cohesion. However, these elements, which usually primarily characterize a Shakespeare production, feel beside the point when accessorizing such a controlled, effective production. (Monica Westin)