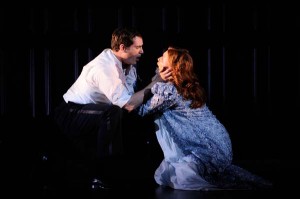 No one is going to confuse Benjamin Britten’s “Owen Wingrave” with his setting of “The Turn of the Screw,” that’s for sure. Although both are based on Henry James novellas, “Screw” is not only better known as a work in and of itself, but Britten’s music for the work is more accessible. “Wingrave” is a late Britten piece: so late, in fact, that it was written for television, a medium that barely existed when Britten was writing his early operas. Britten was old, ill and was considered old-fashioned and was therefore experimenting with different musical styles and techniques, including the use of musical “cells” that would become the trademark of Minimalism, and 12-tone technique which serves to give “Wingrave” some of its ambiguous sound, although the work never leaves tonality altogether. Basically, there are two threads at work. First, the story of a family estate haunted by a young son and his soldier father who beat the son to death when the son backed off from a challenge to fight a playmate and who then himself died of remorse after striking the son. Second, the current heir to the estate’s refusal to enter into the family trade of soldiering and the incredulous—soon to become hostile and belittling—responses by the estate’s elder relatives and friends who see warfare as a high family calling and a necessity to maintain order and Empire. The dialogue that takes place at the dinner table about war and pacifism is almost verbatim the same heated conversations that I remember growing up during the height of the Vietnam War. I can still remember my mother’s reaction when I hung up a popular poster of the day in my bedroom that said, “Suppose they had a war and nobody came?” My cousin went so far as to become a conscientious objector and it split the family in half, as was typical of what was happening in homes throughout America at the time. Britten himself struggled with the same issues, as he left England for America at the start of World War II, only to return in 1943 amidst charges that he had left the country in its hour of need, but his pacifist views never changed, taking their fullest form and expression in his haunting “War Requiem” that reopened Coventry Cathedral when it was rebuilt after the war. “Wingrave” is not a work on that order, but when staged as carefully and effectively as this Chicago Opera Theater production, the piece has enormous value, especially during a time of war, real or imagined. Particularly effective was the decision to have the father and son ghosts appear in pantomime throughout the opera, from its prologue to its tragic climax, which nicely brings the work threads together. Less effective was the decision to use a canned performance of a children’s chorus that appears at two pivotal points in the opera and to cut Britten’s orchestration down to a third of what is specified, although COT’s engaging of longtime Britten associate Steuart Bedford to conduct the work was a real coup.  (Dennis Polkow)