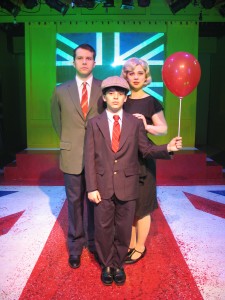 Director Jeffrey Cass has a good handle on musicals, even silly ones like “The Who’s Tommy,” now at Circle Theatre in Forest Park.

It’s about a young boy who becomes deaf, dumb and blind after witnessing a murder, is molested and bullied, discovers a genius for pinball playing, becomes a celebrity, regains his senses, is transformed into a messiah of sorts and then rejects it all for a normal life like yours and mine.  (And people say “Cats” has a stupid through-line.)  And yet, what Cass and his excellent creative team have done with the piece, that began as a 1969 double-album and was also the basis for auteur director Ken Russell’s campy celluloid treatment of 1975, is probably all you could hope for:  bombard an audience’s senses with pure musical and visual panache and divert their attention from the narrative absurdities and thematic shallowness.  This is exactly what director Des McAnuff (most recently responsible for “Jersey Boys”) accomplished with his extravagant staging from the early 1990s for California’s La Jolla Playhouse.

Unlike that production, which I caught on Broadway and in Boston via its first national tour, Circle can’t fly its actors around on wires or hydraulically propel set pieces in and out of space.  Instead, and all the better because of it since it adds a layer of humanity that was always missing in New York and Boston, Circle’s kinetic punch comes from the hard-working ensemble, constantly in motion and gliding in and around the small stage—sometimes within a single number to convey multiple locations—to infuse the production with a cinematic pizzazz that speaks to director Cass’ innate instincts for scene transitions and musical staging.

Like the Broadway original, however, there is heavy use of video projections and rock-concert lighting (floodlights and fluorescents) for much of its visual assault. But there’s also simple-yet-stunning use of color here, no doubt inspired by 1960s Carnaby Street London, the time period that gave birth to Pete Townshend’s acid trip of a show, with designer Bob Knuth having bathed the set in a canary yellow against which rich blacks (a dress), blood reds (a child’s balloon) and bright cerulean blues (a cardigan sweater) “pop.” Like the British flag decals that adorn the set walls and furniture, the effect on the eye is always striking.

Overall, the Circle ensemble does well with what is a demanding show for both male and female vocalists (musical director Carolyn Brady Riley and her five-piece band are responsible for rocking out Townshend’s rollicking good songs).  In the leads, handsome Eric Lindahl boasts a beautifully unforced vibrato (especially on open vowels) that soars through some of his notoriously difficult high passages, and he does the seemingly impossible in creating a presence for his underwritten character (I’d love to see him tackle Bobby in “Company”).  Jon Landvick possesses a glorious rock tenor that he occasionally lets rip to great effect.  Tom McGunn in the title role exercises his vocal gymnastics with confidence, but his chiseled face and piercing blue eyes make more of an impression when standing around and saying nothing (as befits a deaf, dumb and blind character).  As for Michelle Pickett, her voice blends beautifully with Mr. Lindahl’s and she nails some of her crucial belty passages, but she’s often overpowered by the band and sounds tentative in her lower register.  The run may improve this.

My biggest kudos, however, are for choreographer (and Circle artistic director) Kevin Bellie; it’s his best work to date, especially with the famous Act One “Sensation” dance break and the “Pinball Wizard” sequences.  He effortlessly folds period-specific moves like the Jerk and the Pony into an athletically demanding and infectiously high-energy whole (an ode to 1950s old-fashioned calisthenics perhaps?).  He demands of his dancers that they stop mid-rhythm for a stationary hip gyration (they’re in awe of Tommy’s pinball prowess), a very Twyla Tharpish way of defying your expectations of where the choreography will go and instead redirecting a dancer’s energy in a wonderfully unexpected way.  His lifts look a little awkward in such a low-vaulted theater, and I thought the “Acid Queen” number, the choreographic bastard child of Reinking’s “All that Jazz” and Fosse’s “Air-otica,” was a mistake, but overall Bellie’s work here telegraphs a terpsichorean jubilance, captures the period within which “Tommy” takes place and is thrilling to behold.

This is an exuberant and oftentimes sensationally staged evening of musical theater, and it’s easily one of Circle’s most ambitious and accomplished productions to date. (Fabrizio O. Almeida)