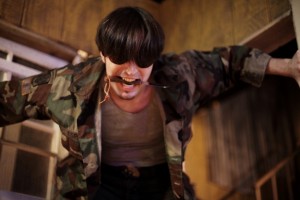 Ah, the Heartland in decline.  There’s nothing quite like a romp through the rotting fruited plain. Shattered Globe Theatre’s “Buried Child” is a tragic look at “good” people with bad secrets.

Vince (David Dastmalchian) and Shelly (Helen Sadler) arrive at his family home to a family that can’t recognize him; the couple proceeds to dig through their sordid past. The ensemble’s bench is deep; Gerrit O’Neill makes troubled son Tilden’s pain palpable and Maury Cooper’s Dodge is a sour slice of lemon. Linda Reiter’s Halie frantically pursues the bourgeois trappings due her; Reiter has cornered the market on slappable shrews. Steve Scott’s direction keeps the show from mucking around in melodrama and makes rebirth seem possible.

Radical personality shifts in some characters are never explained, but it’s Sam Shepard, so who cares? The man puts the English language in a death lock; he knows how to express the inexpressible. (Lisa Buscani)

Buried Child at the Shattered Globe Theater at the Greenhouse Theatre Center, 2257 N. Lincoln. Through July 17.