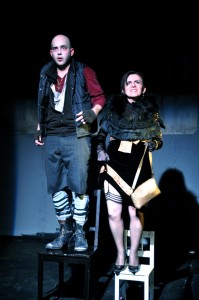 Challenging but breathtaking expressionist theater from Polish literary sensation Dorota Maslowska. A Polish soap-opera actor, slumming it, takes too many drugs at a party and runs off, in a costume of destitution and blackened teeth, with a pregnant young mother. She’s as irresponsible as he is, but living with the terrible conditions of existence that he’s affecting, and on their epic nightmarish journey through Poland, the differences in their real lives turn out to be deadly. The play begins somewhat indulgently with the two holding up a car and spouting surrealist rants and terrible paranoid hallucinations, but it quickly settles into a gorgeous and off-balanced abstract piece about identity, class and xenophobia. Director Max Truax, whose “No Darkness Round My Stone” this fall at Trap Door showed off his mastery of European stylization, guides “Romanians” in a fluid but unsettling way between playful dark comedy and stark minimalism, and he pulls truly inspired performances from the entire cast (especially Tiffany Bedwell as the chameleon-like pregnant girl, equal parts victim and monster). But the most striking element of the production is its use of chairs, which compose each scene and serve as stand-ins for absent figures, becoming incredibly loaded with meaning by the terrifying last scenes. Technically unnerving as well, with gorgeous use of ambient noise and creepy filmstrip projections that add to the dream logic of the show. (Monica Westin)