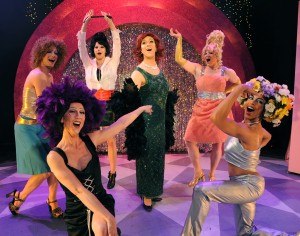 As a longtime composer of musicals, Jerry Herman had written his share of love songs for such legendary shows as “Hello, Dolly” and “Mame,” but none quite like he wrote for his 1983 show “La Cage aux Folles.”  Written during the early years of the AIDS epidemic, the musical, based on the 1973 French farce play and the famous 1978 French-Italian film, sought to serve as an antidote to longtime gay stereotypes that were intensifying during the crisis. In retrospect, the work reveals that adapter Harvey Fierstein was heavy-handed in having every gay character in the show be patience, virtue and understanding personified, and every heterosexual be a Reagan homophobe on a witch hunt; even the son of the gay couple is seduced by the attitudes of his fiancée’s right-wing family, who are made into caricatures so stereotypical as to be right of Dick Cheney—the father of a lesbian daughter, by the way.  Being a mainstream Broadway enterprise, the original staging was careful never to show the gay couple kissing or embracing, but times have changed, and with the debate over gay marriage raging across the country, director Stephen M. Genovese shrewdly realizes that the most effective way to stage this show now is to have the two couples—gay and straight—show the same amount of love and affection for each other to make the point that love is love, no matter what form it comes.  And the leads, by the way, are all terrific: Michael Kinston and Kevin Bishop as Georges and Albin, and Patrick Tierney and Kristine Burdi as Jean-Michael and Anne, really both do seem as if each couple are truly smitten with one another.  And then there’s the score, some of the best love songs ever written for a musical, though under-appreciated for obvious reasons.  “The Best of Times” has such superb melancholy and retrospection and, like “Song of the Sand,” both are great love songs, regardless of sexual orientation. “I Am Who I Am” is a show-stopper both in its cross-dressing chorus incarnation and as a life-affirming anthem for Albin to remind his lover and the son he helped raised who is suddenly ashamed of him what it means to be true to one’s self; Bishop’s performance is a real tear-jerker.  But when the show goes for fun, it doesn’t skimp on gaudy spectacle or comedy.  (Dennis Polkow)