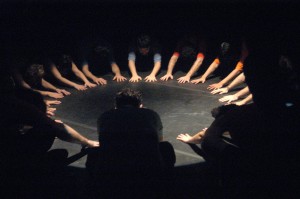 One of the most memorable moments from last summer’s Global Rhythms festival was a solo performance by a musician from Brazilian body-percussion troupe Barbatuques. Slapping, snapping, yawping and stomping, the artist gave a performance full of humor and charm, producing more simultaneous polyrhythms than should be possible with only one set of arms and legs. The piece was a teaser for an upcoming evening-length show by the entire company (imagine this times fourteen!) scheduled for the Harris Theater later in the season. It was to be Barbatuques’ U.S. debut, arranged thanks to the Chicago Human Rhythm Project’s artistic director (and Chicago’s unofficial percussion ambassador to the world) Lane Alexander. Sadly, the performance was postponed due to last-minute visa complications.

Now the paperwork is straightened out and Barbatuques will perform instead at the more intimate MCA Stage as a part of the CHRP National Tap Day concerts. “We see a lot of similarities between tap dancing and what we do,” said Barbatuques musical director Fernando Barba—the name of the company is a combination of his stage name (Barba, meaning “beard,” is his nickname) and the Portuguese word for drumming. “We are of a similar mind,” he says.

In speaking to Barba over the phone several months ago, it became clear that the playfulness of that solo performance was characteristic of the group from its inception. Barba, fascinated with music from a young age, would experiment with rhythms, tapping on found objects as he wandered the streets as a child. “I found the body was a good tool,” he said. “I began doing things with snaps and taps on the chest—it had no real purpose at first, but it became a kind of mania for me. Friends became interested, asking me to show them how to do certain things. Barbatuques is a collaboration of many people and many years of research, but it was never a planned idea. It was spontaneous—something that grew and grew.”

For their North American debut, Barbatuques will perform selections from “Body of Sound,” an upbeat, interactive show with musical influences from Africa, Asia, Brazilian chant and even electronic music. Barba assured me that “the body can do the machine too.” The program includes a solo performance by Broadway hoofer Jason Samuels Smith and BAM!, the CHRP ensemble, which will team up with Barbatuques for a thunderous cross-cultural finale. (Sharon Hoyer)