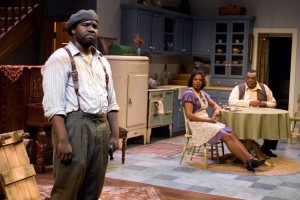 When August Wilson’s “The Piano Lesson” appeared more than two decades ago, the idea of an African-American playwright reflecting the African-American experience was still largely a novelty. Here, at last, were fully developed black characters not as imagined by white writers, but an attempt to chronicle the journey of a people attempting to adjust decade-by-decade to the realities of post-slavery America where true freedom still remained largely elusive.

The struggle reflected in “The Piano Lesson,” the 1930s entry in Wilson’s ten-play twentieth-century cycle, is one of legacy, magnificently symbolized in an elaborately hand-carved upright piano uniquely tied to a family’s past and drenched in the blood of its ancestors. For Berneice (Tyla Abercrumbie), the fact that her relatives were sold for the piano to be obtained by their master’s family and that another relative carved the faces of the sold slaves on the piano for a member of the master’s family who missed them after the fact (and that Berneice’s father later died taking it) means that she must cling to the instrument as a memorial to the family’s immense sacrifice.  For her brother Boy Willie (Ronald L. Conner), the piano represents a legacy of a future rather than the past, as a means to purchase a plot of land to provide the American dream that so cruelly eluded their relatives. These siblings each have a deep and legitimate stake in what becomes of the piano, and the brilliance of Wilson’s play is that we get to know both characters and their various friends and family members so well that it becomes difficult for us to take sides as to what the best legacy would be for all concerned.

Complicating the proceedings is that in addition to the ghosts that the characters carry with them, there is a restless ghost that wants to keep the piano in the house and shrieks, makes the piano immobile, sends wind blasts through the house and turns the lights on and off.  In director Ron OJ Parson’s staging, the supernatural element that some of us would rather interpret as a collective manifestation of the family’s own inner demons, is given the drive-in horror movie treatment complete with wind blowing overhead at audience members, overdone sound effects and moving drawers, cabinets and flickering lamps.  Such literalism is so out of place that the emotional thrust of the play’s climax is virtually lost in the shuffle and at least during the weekend evening performance that I saw, created the perhaps unintentional effect of having some of the audience respond with light laughter. Even so, the ensemble cast is so first-rate and Wilson’s use of language and characters so memorable that if you are able to bracket the cornball ending, this is still a piano lesson well worth taking.  (Dennis Polkow)