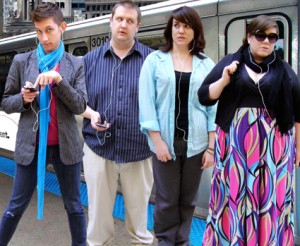 It would be easy to write this show off altogether. Four actors deliver autobiographical (read: wildly, often overly confessional) monologues in tandem, beginning with childhood traumas and ending tritely with each of their present-day addictions, which are food, sex, cigarettes and alcohol, respectively. The structure is simple; the audience sits with the actors in a pretend red line El train and, one at a time, each actor momentarily takes iPod buds out to tell a story while others listen, then sits down again. Sometimes the stories work thematically with this format, such as when Nathan Stoner eloquently explains the relevance of a song he listens to constantly that reminds him of a past relationship. Other times the anecdotes, such as childhood sexual abuse and frat party blowjobs, feel exhibitionistic and simply inappropriate for stage, and it’s often hard not to wish the actors were talking to a therapist instead of an audience. The majority of the monologues are tragic but not interesting as they stand, just south of that sometimes vast, sometimes subtle difference between turning life into art and presenting one’s self as an object of interest.  That said, there are some fabulously funny moments, such as Anna Schlegel’s hilarious fantasy of beating up the hippie chick moving in on her man (she gets him back), at least one story from each actor that’s truly moving. Some serious editing could produce a great handful of monologues suitable for a less egocentric project. (Monica Westin)