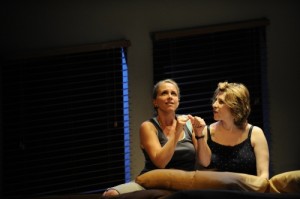 Two couples, three languages and some long instant-message-conversation projections later, “Love Person” gets to the heart of the language of romance in a surprisingly moving production. The show is laced with wince-inducing references and readings of love poems. It often feels utterly artificial and contrived, it conveys a simplistic message and, above all else, it’s awkwardly adolescent, with clunky writing and heavy-handed emotional appeals. In other words, it shows us what we do and what we’re like when we try to express our love. The plot is stock and almost incidental: two couples intertwine in the waxing and waning of relationships, where the plot’s hinge lies in two lonely people in love reaching out over internet communication, then retreating. What’s so gorgeous about the show is its fundamental understanding of the underlying anxiety about expressing our feelings to one another, underscored by the proliferation of languages—Sanskrit, English and American Sign Language—translated imperfectly by characters and superscript; even when they face one another, speaking in the same language, it’s the lack of communication more than its accomplishment that comes across.  It’s also the first show I’ve seen that felicitously stages an online messaging conversation, yet another mediating interface of would-be lovers. The strength of this theme and the elegance of the set overcome some uneven acting and a touch too much saccharine. (Monica Westin)