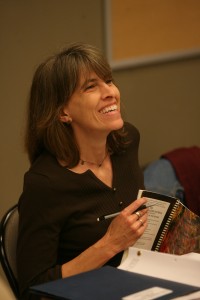 It’s just minutes after the curtain has come down on the final preview performance of “The Crowd You’re In With” and playwright Rebecca Gilman, diminutive in frame and with a quiet murmur of a voice that belies the substantial presence her controversial plays have had in the American theater over the past decade or so, is standing in the lobby of the Goodman Theatre.  “Waiting for the critics to crucify me,” she says with a smile.  The following evening the author is feeling pressure of a different kind.  Safely ensconced in her Edgewater home, Gilman—also an assistant professor in playwriting and screenwriting in the MFA program at Northwestern University—is a little behind on reading and grading two classes’ worth of student final papers.  “But don’t publish that,” she says through a hearty laugh and with a mischievous wit that has characterized much of her writing, “I don’t want anyone to know that I’m not on top of things.”

Twenty-four hours from now, at the play’s official opening night, audiences as well as critics will once again know a playwright at the top of her game.

For the uninitiated, going to a new Rebecca Gilman play means always having to wonder, “What will I feel sorry for now?”  After all, and thanks to Gilman, well-meaning liberals have been forced to confront their ugly racial prejudices (“Spinning into Butter”), men have gotten in touch with their inner misogynists and stalkers (“Boy Gets Girl”), critics have been called on their mean-spirited schadenfreude (“The Sweetest Swing in Baseball”) and everyone has had to face their complex emotions when it comes to the morally and financially disenfranchised (“Blue Surge”; “The Glory of Living”).  With “The Crowd You’re In With,” people pondering procreation beware!  Set in the backyard of a two-flat on the north side of Chicago, the play sees a Fourth of July BBQ go horribly awry after three couples—two in their early thirties and the other a generation older—exchange diverse ideas and brutally honest opinions on everything from politics and friendship to the beauty and bleakness of baby bearing.  It’s that last topic that sets off much of the play’s verbal fireworks, and that serves as a refreshing reminder of how entertaining a controversial adult comedy can be.  (And given the play’s eighty-minute intermission-less running time, it practically guarantees enough time for a late dinner over which to continue the spirited debate.)

For the record, Gilman and her husband of eight years, Charles, are deliberately childless, a choice that was as intuitive for them as it must be for those who know they want to be parents. “After being asked why I didn’t want children, I started wondering if anyone asks the opposite question, ‘Why do you want children?'”  Gilman elaborates.  “I have a friend who’s 34 and she and her husband don’t know if they want to have children or not.  She emailed me and said ‘You’d think being 34 and not knowing if you want kids was the crime of the century.’  I understood what she’s going through.  It’s not the crime of the century.  Why is any one person’s decision a threat to someone who made a different decision?  I thought maybe I could represent the other side.”

Representing the other side, along with different points of view, has always been a hallmark of Gilman’s work.  It also seems to uncannily characterize most of her comments, befitting a playwright with a good counterpoint for every strong point.  “Not having children doesn’t mean you’re never around children.  It’s not an either/or thing.  You find ways to incorporate them into your life.  Being at the beach with my nephews was one of the funnest days of my life.  It’s really fun to have kids.”  The Alabama-born writer, the youngest of four siblings herself and the proud aunt of three nephews and a niece, considers this before adding, “…but then I think, now I’ve had enough and I get to go home and leave the kids with my sister.”  When I propose the notion that her plays could be her children—Gilman is known, after all, for heavily revising her works over time—she politely but very matter-of-factly states, “I’m irritated by that.  It’s not true, you know, plays are a stack of papers.”  Her relationships in academia, however, may be the closest she has come to accidental motherhood.  “I’ve only been teaching for three years but I do find myself really protective of them [Gilman’s students], really wanting to look out for them, and I imagine that being a parent is like that.”  She delivers her comments more as questions rather than statements, as if slowly reaching an epiphany of sorts.  But then, like someone who’s ready to laugh at herself for having said something even mildly profound, she adds, “But I didn’t have to deal with their terrible teenage years.  So they may have been awful when they were young but I don’t know that!”  Gilman then says something that seems to sum up the play’s main message:  “I want other people to have children.  I just don’t want to have grief for not having them myself.”  More laughter.

So when Gilman isn’t creating absorbing drama in Edgewater, shaping sharp minds in Evanston or taking random road trips around the Midwest (“My husband and I like to drive around a lot.”), what does she do?  Maintain her and her husband’s Netflix queue, of course.  “There is a one-hour documentary about the evolution of the chicken on there, a special on birds… ‘The Battle of Algiers’…lots of documentaries.”  After considering this for a moment, another chuckle-filled counterpoint from the playwright:  “Can we put in a comedy now?”