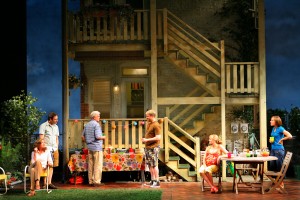 To breed, or not to breed, that is the question. Rebecca Gilman’s newest and engaging play “The Crowd You’re In With” eerily echoes dialogues taking place between contemporary couples about having children. Yet it is worth noting how new of a conversation that this actually is; before oral contraceptives were widely introduced in 1960, it was not unusual for married women to become pregnant virtually every year of their child-bearing lives. Of course, being regularly pregnant did not mean that every pregnancy came to term; miscarriages were common.  And even when they did, infant- and child-mortality rates were high.  My father, who would be 93 if he were still with us, was born in rural Minnesota, obviously at home, and was barely breathing when he was born. The doctor who delivered him told the family to place him in a shoebox on the kitchen wood-burning stove, and if he were still alive the next morning, to get in touch with him.  His parents had already buried another infant, as was then commonplace.

In most cultures, children are literally seen as wealth, particularly to rural families (i.e., farmhands), and having children is still largely viewed as inevitable and a blessing. Even in China, where the Communist party mandates a “one child” policy, it is commonplace for couples to risk fines and ignore the ban to have additional children, especially in the rural provinces.

What does any of this have to do with Gilman’s play? Quite a lot, actually. Though I found myself thoroughly engrossed in the dialogue and the issues at hand because I have heard such discussions about child-bearing surrounding me for years, I was also struck by how insular this dialogue actually is. Only those who are wealthy, urban and highly educated are likely to participate in such a discussion.  Most of the rest of the world simply does the deed, and lets the kids fall where they may. (Even as I am writing this, outside my window I can hear the tantrums of three toddlers next door, the children of my neighbor’s teenaged daughter who still lives with her parents, who are basically raising two generations of children at the same time without a father.)

Gilman’s scenario is a Fourth of July Chicago neighborhood backyard barbecue hosted by a couple contemplating pregnancy. Their guests include a young couple whose expected child is already the center of their lives, and an elderly couple who, we discover, have deliberately chosen not to have children. A neighborhood stoner offers some comic relief, particularly in a tour de force monologue about the behavior of toddlers and their parents in restaurants that nearly steals the show. Frequent Gilman collaborator Wendy C. Goldberg directs the show’s stellar ensemble cast with a careful eye on timing and really has the performers convincingly portray how much we can be unduly influenced, for better or worse, by those who are closest to us.

That the deck is stacked to proselytize for a particular view becomes obvious in the last scenes of this intermissionless eighty-five-minute show, as things get uncomfortably preachy. The other side, which previously had been given equal time, is left in the dust as seeming unreasonable. Perhaps Gilman felt this was necessary given that the perspective expressed is neither a popular nor a majority view, so we apparently need to be clubbed over the head to get her point. In real life, however, I can’t help but think her characters would eventually arrive at another resolution altogether, given the forces at play and who ultimately holds the cards, or the contraceptives, as it may be. (Dennis Polkow)