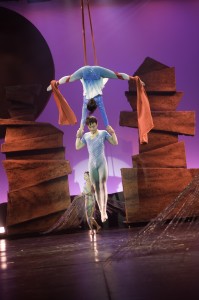 Cirque Shanghai’s annual summer visit to Chicago is a time to round up good friends, bask in the Navy Pier open-air setting and marvel at the suppleness of the human body.  This year—the troupe’s fourth with “Bright Spirit”—offers the same basic physical daredevilry and moments of real wonder, but overall the installment felt shorter in length, lighter in the number of traditional Chinese circus acts, and smaller in total number of performers.  Given the state of the global economy, it makes you wonder:  has the recession affected even grandiose entertainment juggernauts like Cirque Shanghai?  Is less more?  You can decide that last question for yourself, since this unique Chicago circus tradition still deserves to be experienced, but compared to last summer’s ravishing and majestic “Cirque Shanghai: Gold” I’m afraid “Bright Spirit” wins Silver at best.

The contortion portion of the show features impossibly strong gamine girls.  Assembling into human sculptures like physical poetry, these formations flower into the air and form stage pictures evoking the beautiful strangeness of an Anne Geddes photograph. The “Silk Flyers,” always a Cirque favorite, slice through the air and make a case for the beautiful aesthetic that is unique to the Chinese circus. The “Diabolo” takes a centuries-old childhood game involving Oriental yo-yos and makes for an ensemble effort of marvelous precision and timing.  And yet not everything works, especially with the “international” sections.  “Spanish Web,” a long-used European circus term to describe an aerialist clinging tightly to a rope as it is rapidly twirled from below, sounds more spectacular than it truly is, like one of those lesser tricks that Brooke Shields could pull off on “Circus of the Stars” twenty-five years ago. And what’s with all the American influences? Pyramid formations of boys juggling and doing tricks with “Straw Hats” looked like something out of Great America in Gurnee, but at least the costumes—bearing a striking resemblance to some of Willa Kim’s Tony-nominated costumes for Bob Fosse’s “Dancin'”—had a campy appeal. A tacky sequence involving performers inexplicably bouncing around on banana yellow and donut-shaped tires (“Tyres”) reminds you that this is the culture that brought us “Teletubbies.”  And when a bunch of guys doing the “Team Jump Rope” are decked out in white cutoffs, orange-sherbet-colored shirts and white high-tops, the pulsating music sounding like it had been piped in from a gay disco, it made me wonder why I was watching the Jesse White Tumblers instead of, say, something like “Pole Climbing,” an authentic Chinese act from last year that effectively highlighted its young gymnasts’ acrobatic skills.

Clearly, I was entertained, as no doubt you will be, too.  Unfortunately, I just didn’t find myself as enthralled or involved as I was last year.  Maybe it was the lack of traditional Cirque Shanghai sequences.  Maybe it was the skimpy sets.  Maybe it was the cheesy 1950s science-fiction-Martian-movie-cum-Asian aesthetic-inspired costumes.  Maybe it was the fact that the enormous Pepsi Skyline Stage at Navy Pier dwarfed the company’s reduced numbers.  Maybe it’s that damn recession and its global effects on the arts. A marketing campaign trumpeting affordable seats (a good thing) and spectacular family savings seems to suggest as much.  Just remember, you get what you pay for. (Fabrizio O. Almeida)