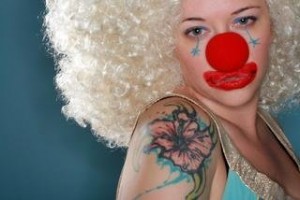 If you’re into performance and Poonie’s Cabaret isn’t on your radar, it should be. A quarterly event curated by Jyl Fehrenkamp, the cabaret features works from the realms of dance, performance art, clowning, burlesque and improvization. Fehrenkamp both scouts some artists and is personally approached by others after shows to become involved. “I’m loosely a curator,” she says, noting that her job, to showcase a strong mix of performance and dance, is easy to do in a city with so much talent.

This summer’s show, on Monday, June 15, will feature dance by Szewai Lee, Zac Whittenburg and the GETDOWN/PICKUP company; Molly Jaeger’s explorative improvisation, and performance pieces by Synapse Arts Collective, Ventrilla Kiss, and Sarah Weidmann. The headliner is Lez BoBo the Clown, whose work goes far beyond traditional clowning and confronts conceptions of the genre by infiltrating her pieces with other kinds of performance from stripping to spoken word. Fehrenkamp laughs as she describes Lez BoBo as the “headliner.” “I asked them if I could call her a very very special guest star. She has a brand of clown burlesque that’s incredibly provocative, even disturbing.”

Fehrenkamp’s lineups make for a highly conceptual evening, but what makes the Cabaret special is its place in the dance and performance community. Named for Poonie Dodson, a Chicago dancer  who died of AIDS in the early nineties, the show is pay-what-you-can or a $5 donation to the Links Hall Duncan Erley Coming Out of the Closet Fund, awarded to artists who work with activism and healing in the gay community. And it’s one of the few venues for seeing works in progress—as Fehrenkamp says, it’s a “low-risk investment for audiences and performers, so you can do risk-taking in the work itself.” With its wide variety of dance and performance art and running time under and hour and a half, it’s a highly effective model for exposing new artists. (Monica Westin)