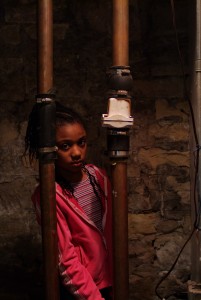 When the Robert Taylor Homes are torn down, a resident family of the projects is displaced to a motel on the South Side of Chicago, where they enact their seemingly inevitable self-destructive tragedy. While the story centers around the child Hope, who escapes into an imaginary friendship with Whoopi Goldberg, it’s the tragedy of her fearsome mother Queenie that drives the play. The show is worth it just to see Du Shon Monique Brown’s performance as Queenie, abusive, damaged and desperate, and the tension as other characters respond to and eventually confront her. The other characters—a saccharine grandmother, shiftless father and uncle, and a dangerously sexy babysitter—are less interesting and often the bearers of cliché. “Hope VI” is full of astutely pointed moments, such as a scathing satire of black TV families as seen through Hope’s fantasy of her “TV mom,” but there’s also a lack of tightness to the show that makes some scenes that should be heartbreaking simply awkward, and sometimes more like a read-through than a final production. There’s a momentous play in there, though, if inconsistent and sometimes occluded. (Monica Westin)