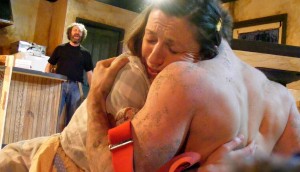 Mary-Arrchie does its best but can’t breathe much life into Keith Huff’s unconvincing play, which has both an overly derivative plot (a stranger who may or may not be an angel arrives in a small town and acts as a catalyst for awareness and change) and often throwaway writing (a disillusioned young man named Buzzy declares in one of his longer speeches that “life’s a bunch of people straddling train tracks grabbing people and trying to get saved”). The setting is a downhome diner on the outskirts of a small town, where a waitress named Barb, who has a history of running off with men who drive trucks, tells her daughter that they’re mud people, “stuck in something they can’t get out of.” The angel gets them, and some hysterical folks from town, healed enough to get unstuck. Jo Bolduc carries the production as Barb, while other actors have a hard time bringing the lines to life, like Mitchley, the psychopathic diner owner who’s indecipherable much of the time. It’s a hard show to swallow; and when the angel gets shot with a shotgun and Buzzy rhapsodizes about a near-death experience that extinguished his torches of want, hate and delusion, it’s hard to understand why such a bright playwright and artistic theater company would team up on such a ham-fisted production. That said, many characteristic elements of a great Mary-Arrchie production are present, including a gorgeous set, effective pacing and some nice atmospheric elements in the form of jukebox music. (Monica Westin)