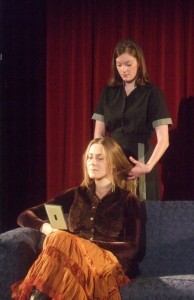 The second annual Alcyone Festival opens this week, dedicated to celebrating female playwrights and combating their lack of representation on American stages. Newcity spoke with Tony Adams, the artistic director of Halcyon Theater and curator of the festival.

Tell me about the concept for this year’s festival. Is there a through-line or common theme? How will the plays work together?

We’re focused on bringing women writers to light, specifically playing with outdated notions about the plays women write. The idea of the festival has been to undermine the idea that women write small domestic dramas, and we tried to get as far away from that idea as possible. Last year’s festival was inspired by the playwright Lillian Hellman, and we played with the idea of “1000 years up to Lillian Hellman,” producing plays of early female playwrights from that entire span of time. This year’s show will focus on themes as far from domestic drama as possible: terrorism and the cult of martyrdom in different variations. (They take place in locations from Palestine to Bosnia to a non-specific milieu reminiscent of Denmark.)

How did you choose the plays?

I started off looking at published scripts, and frankly I wasn’t finding much, mostly because plays don’t get published generally unless they’ve played in New York, and so few productions written by women are done at all, let alone in New York. So I sent messages out to literary managers and critics I know, and I got tons of suggestions. I was  humbled by the response, really. For example, Betty Shamieh’s name I had just heard in passing before then, but half a dozen playwrights from across the country suggested her name, with all different plays. The group of shows I have are international and heavy-hitting, with playwrights from Sweden, New Zealand, Canada, Denmark… They’re all writers whose first time it is in Chicago, although they may be incredibly famous at home. Astrid Saalbach (“Blessed Child,” pictured) is arguably the most famous contemporary Scandinavian writer right now. I’m honestly astonished that we get to do many of these plays.