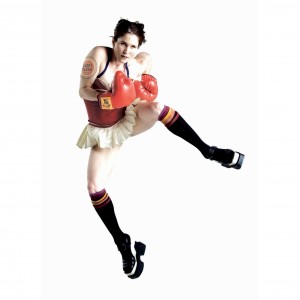 In their tenth-anniversary year, Lucky Plush is working to unravel the tangential and emotionally charged knot of issues tied up with intellectual property. Artistic director Julia Rhodes and company use YouTube—that trove of choreography, ripe for appropriation or plunder—as a departure point, poking at conceptions of influence, memory, theft and the monetary value placed on art via their new website StealThisDance.com (a nod to Abbie Hoffman’s 1971 guide to rebellion, “Steal This Book”). I spoke with Rhodes about their upcoming show at Links Hall, “In the Middle, Somewhat Replicated”—a collaborative effort with San Francisco-based Smith/Wymore Disappearing Acts.

How does this performance fit into the larger project?

When I was thinking about our tenth-anniversary season and how so many companies do retrospectives I thought, I don’t do repertory pieces…maybe I’ll sample bits and pieces to fit into an evening-length work. Then I thought why stop there? Let’s really talk about sampling in dance; it’s a hot topic and needs to be discussed, with the vast amounts of appropriation happening on the web.

Tell me about the collaboration with Smith/Wymore Disappearing Acts.

We’ve worked with Sheldon [Smith] and Lisa [Wymore] before and love them. I was sharing with Sheldon the idea for our anniversary and he chuckled; they just did a piece about YouTube. We decided to have a shared concert that has tendrils of both of our investigations of intellectual property. We’re collaborating on a work started by uploading movement material to YouTube. It’s going in a chain fashion, creating one long phrase; Sheldon started and where he ended I mimicked, and then he did something more. It’s bounced back and forth several times. We’re going to take that phrase material and collaborate the week before the show, having a fast and furious development process right beforehand.

Their piece “Asynchronous Love Scene” was created using a program called Isadora that allows the user to upload video, set and reset and layer images. Their piece talks a lot about identity and memory in dance.