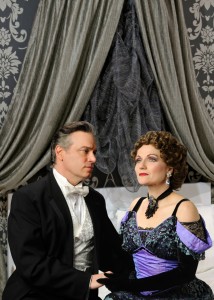 Just as “Sweeney Todd” is the work closest to opera in the Sondheim canon, “A Little Night Music” is the closest Sondheim work to operetta, with its consistent use of waltz-like rhythms (virtually everything is in triple meter) and some of his most melodic material, including his most popular song, “Send in the Clowns.” Additionally, it is Sondheim’s most elaborate use of the kind of counterpoint that Leonard Bernstein had experimented with in the climax of “West Side Story,” for which Sondheim wrote the lyrics, and also includes an orchestration that is at times evocative of Ravel’s “La Valse” and Richard Strauss’ “Der Rosenkavalier;” musically, it ranks among Sondheim’s most ambitious and adventurous works.  As such, it is the ideal vehicle for Light Opera Works to tackle as its first fully-staged Sondheim production in more than twenty-five years, not counting last fall’s Sondheim revue “Side by Side by Sondheim” at the company’s smaller venue. Yes, show voices can sing this stuff, often quite nicely, but oh, isn’t it rich to be able to hear such oft-done pieces heard in context and done up with trained voices that can really due full justice to their nuances and accompanied by the lilts and extravagance of a full orchestra with an ensemble cast in colorful costumes that often literally dances its way in and out of scenes.

Director and choreographer Rudy Hogenmiller has assembled a cast of LOW veterans—including Larry Adams as middle-aged lawyer Fredrik and Natalie Ford as his naïve, new teenaged wife—and stellar newcomers—Catherine Lord as eccentric actress and former Fredrik lover Désirée and Mike Reckling as Fredrik’s morose seminarian son Henrik—that not only bring out musical meaning, but dramatic sensitivity as well, all the while remembering that this is a comedy, albeit, often a poignant and dark comedy.  And unlike last weekend’s gutted if gloriously sung “Camelot” at Ravinia, LOW is presenting every word of Hugh Wheeler’s book and every note of the score, exactly as Sondheim wrote it, even including “The Glorious Life,” a glorious ensemble number written for the movie version.

It is also fascinating to watch much of LOW’s often conservative audience sit there with a “I’m from the operetta and traditional musical camp, show me what you have for me, upstart Sondheim,” only to see them gradually but thoroughly be won over by the special charms of this work. By the time Lord sings a tender and introspective “Send in the Clowns” accompanied by LOW’s lush, full orchestra (movingly led by Roger L. Bingaman) to Adams, whose reactions are almost as important as Lord’s delivery, there are audible gasps at the sheer beauty of the experience, and deservedly so. Given the number of empty seats, however, a portion of LOW’s audience is sitting this one out, which is their own loss, and it also could be that much of the downtown Sondheim base may feel that heading up to Evanston is too far off its radar to risk such a trek.  But in this case, not heading for a weekend in the suburbs, as it were, could well leave you wishing, “It Could Have Been Wonderful.”  (Dennis Polkow)