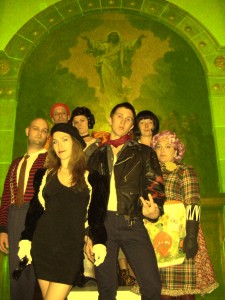 A Lyric Opera donor cancelled his subscription a couple of seasons ago, and wrote across his cancellation that when Lyric starts paying serious attention to opera as a current art form, he would consider reinstating his subscription and his donations.  Even over at Chicago Opera Theater, which has always been more adventurous than Lyric, you usually get a single twentieth-century opera in a three-opera season and, this year, that opera was almost forty years old.

Enter Chicago Opera Vanguard, a new presenter in the City’s ever-evolving cultural landscape that is climaxing its inaugural season (called season 0) of cutting-edge opera with the long-overdue Chicago premiere of British composer Mark-Anthony Turnage’s transposition of the Oedipus myth to the Margaret Thatcher era, “Greek.”  Based on the 1980 Stephen Berkoff play of the same name and commissioned by Hans Werner Henze for the Munich Biennale Festival, Turnage’s operatic treatment is the work that established his reputation as the wunderkind of British new music, a reputation that would later propel him across the Atlantic to become a Chicago Symphony Orchestra composer-in-residence in 2006. This means we have heard him talk more about music than we have actually heard his music, although a number of small and mid-sized pieces of Turnage have been performed here, most recently his crossover work “Scorched,” which alternates Turnage’s orchestral variations on themes of jazz guitarist John Scofield with sets by Scofield himself.  At a time of economic downtown when the CSO is delaying next season’s announced performances of a large-scale work by its other current composer-in-residence, Osvaldo Golijov, you have to admire COV’s gusto for going ahead with these performances of “Greek,” particularly after a major financial backer covering more than a third of the production costs reportedly backed out at the last minute.

Is the end result worth all of the trouble?  Absolutely, in that for all of Turnage’s celebrity, this is the largest-scale work of his that Chicago has yet to hear, and it reveals a lot about his journey as a composer. With reports surfacing that Turnage has been commissioned to write a new opera on Anna Nicole Smith, of all things, hearing his first opera gives us a context for what might be expected.  The sound world of “Greek” is more or less “Pierrot lunaire” meets “Three Penny Opera,” the vocal lines often melding into spoken dialogue, although the enunciation of the young cast is often muddled in part by the fact that the balance between orchestra and singers is not ideal given that the orchestra is behind and above the audience. Ironically, for all of the controversy about the work’s use of profanity, when it does occur, it is almost indecipherable, and surprisingly, most of it is sung; there is a reason that non-melodic musical forms such as rap and hip-hop make a more imaginative use of vulgarity than opera: vowels need to be sustained to sustain pitch and most profanity is riddled with consonants that cut off air-flow.

The student cast by and large has learned its roles quite convincingly, even if some are sometimes swallowing consonants and using vibrato to gloss through more difficult passages.  Baritone Justin Neal Adair particularly distinguishes himself as Eddy, looking and sounding the part of a British tough, complete with magenta hair.  Director and COV founder Eric Reda’s staging is minimal, yet clever, particularly the use of long sheets going from the wedding aisle to honeymoon bed, and red ribbons pulled away from Eddy’s departing eyes during the inevitable climax.  The red “X” as a cartoon symbol to portray lack of eyes, in fact, becomes a constant visual motif, from being spray-painted on the black plastic surrounding scenes to the back of Eddy’s post-wedding suspenders.

If the work’s overall frame of reference, i.e., the Thatcher era, seems somewhat dated and irrelevant now, with a company such as COV on the scene attempting to fill in new opera voids, operas of a given moment will hopefully have the opportunity to be heard here long before that moment itself has passed.  (Dennis Polkow)