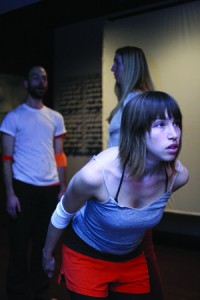 Stridulation is the production of sound achieved by rubbing two body parts together. One of the opening—and most stunning—moments of the new collaborative work by choreographer Rachel Damon and voice artist Dan Mohr casts a spot on two humming dancers, stacked back-to-back and rotating like a giant nocturnal insect inspected under a flashlight. Stridulate is divided into numerous such segments by blackouts; sound generates all movement in these little chapters and the performers generate all sound: hums, croaks, snippets of invented language and rich, major chords. Damon and Mohr explore a wide range of ways to embody the versatile voice over an hour, from gestural, improvisational movement fueled by playful grunts to the meditative stillness achieved by a sustained hum. The press release notes that this is an exercise in formalism and (like many such exercises) it feels lacking in content at moments, like when sounds are coded directly to movements and repeated in fugue. But this isn’t to say exercise doesn’t yield fruit. One example: when a kneeling Jeff Harms—who inhabits the sounds he creates with his entire being, thin body vibrating as if hewn from wood—emits a disturbingly hypnotic croaking while the supine ensemble members arch and writhe as though shaken in their graves. (Sharon Hoyer)