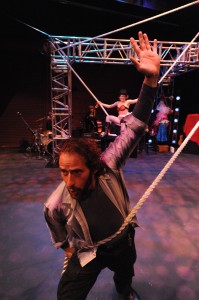 The circus arts and physical theater company 500 Clown has been establishing itself as a preeminent performance troupe for the better part of the last decade. Especially known for the improvisational, exploratory nature of its productions, the group now finds itself at Steppenwolf for the second time presenting their fourth play, “500 Clown and the Elephant Deal.” Newcity spoke with Leslie Danzig, company member and director of the show, about the show’s features, Brechtian influence, and her vision for a new musical theater.

I’ve read that this show is based in part on Brecht’s “Man is Man.” How did you come upon this as a point of origin, and how has it evolved since then?

We actually realized while working on our last play that we’d stumbled into some Brechtian territory, from what we knew about Brecht and what he was up to in staging his plays, that we were already doing onstage. When we were thinking about material for the next show, we then asked ourselves about picking up an actual Brecht play. We settled on “Man is Man” for a few reasons. First, it’s centered around identity as fluid roles we play in our lives. As clowns, we’re always playing roles transparently, so that connection seemed really fruitful. In Brecht’s play identity becomes a game that goes too far, and the line between fiction and reality gets blurred; we see our own shows as a series of games with real consequences and the questions “are we playing? are we in the game or out?” constantly getting blurred. So again, to take that on thematically was interesting to me. And finally it’s a war play, which we wanted to have to deal with, given the wartime we’re in now…. Our hope is to generate resonance with the current power dynamics in the world, and especially the huge gap between civilian world and military world. We are so distanced from real war and what it means to play at war versus what it means to really be on the battlefield. That gap is very troubling to me and very real. As far as evolution, within days of rehearsal we left the Brecht script almost entirely, and although our production is very much inspired by its themes and dramatic situations, almost nothing will probably be directly recognizable (laughs). It would be interesting to hear the response of someone who’s read Brecht’s play, and see what connections they make.

This show and your last one are both musicals. How does the inclusion of music work with your performances?

The impetus to include music came from forming a relationship with John Fournier, the co-creator of this show and a brilliant songwriter and composer; our collaboration launched “Christmas.” Music turns out to work the same way that physical action does, as a very visceral experience, and we love the challenge of finding how the two worlds meet. It can sometimes be a tricky balance, though, because musical underscoring can make performances seem rehearsed or fixed in a certain tone. We’re starting to understand that we’re trying to create a new American musical that doesn’t follow standard musical-theater conventions. With the musical aspect, we hope that the audience will engage with this, as well as our other points of interest, but there are going to be things about the show that won’t work this time around, and we’ll learn from them and change. There’s just so much improvisation in all our performances, where new material gets generated that sticks. We liken our process to what we know of vaudeville—honing acts based on what we learn from audiences, and that spirit informs the creation of all our work. So while we never retire a show, we complete shows but never in a fixed form, and we keep returning to them… which is why “Elephant Deal” is only our fourth play in ten years. We actually started with this show in 2000, and we really take our time, both because of the process and also just because we like to spend a lot of time making them. I have to admit that it’s been a little harder than usual to hold onto that way of working when the venue is Steppenwolf, and we keep having to tell ourselves that we’re at Steppenwolf because it’s a great space to perform in, with an incredible group of people there, and we can keep the same spirit that informs the creation of all our work.